By July, flooding had affected more than 16,000 in Putumayo. Forecasts indicate that the rainfall will likely continue throughout the coming months. (OCHA, 31 Jul 2014). 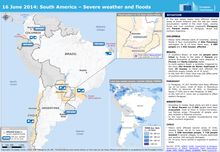