Residents of southwestern Madagascar were experiencing gusty winds, heavy rainfall and rough surf as Cyclone Haruna approaches for landfall on Feb. 21. NASA's Terra satellite captured a visible image of the storm that shows a clear and wide eye as the storm neared the southwestern coast of the island nation.

The Moderate Resolution Imaging Spectroradiometer (MODIS) instrument aboard NASA's Terra satellite captured a visible image of Tropical Storm Haruna on Feb. 21 at 0735 UTC (2:35 a.m. EST) that showed a well-defined eye with deep convective banding of thunderstorms wrapping around the center.

It was moving very slowly at 3 knots (3.4 mph/5.5 kph) in a northeasterly direction, but is expected to turn to the southeast.

At 10:30 a.m. EST on Feb. 21, a weather station in Morombe, Madagascar, on the southwestern side of the island, reported thunderstorms with sustained northerly winds near 29 mph (46.6 kph). The local forecast calls for rainfall amounts up to 3.6 inches (91.4 mm) just on Feb. 21 as Haruna approaches.

The Joint Typhoon Warning Center (JTWC) now forecasts a more inland track for Cyclone Haruna over southwestern Madagascar. The forecast calls for landfall Feb. 21 around 12 UTC (7 a.m. EST) and exit into the Southern Indian Ocean on the southeastern side of the island as a cyclone, about 24 hours later on Feb. 22. 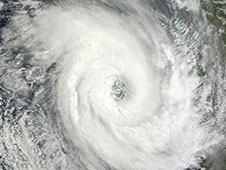