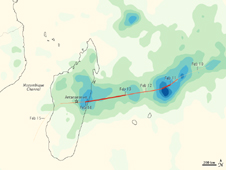 When Tropical Cyclone Giovanna came ashore in eastern Madagascar, the well-organized storm not only brought high winds, but also heavy precipitation. Flooding affected multiple neighborhoods in the capital city of Antananarivo and surrounding areas. As of February 15, 2012, the death toll stood at 16.

This color-coded map shows the rain associated with Giovanna from February 8 to 14, 2012. The heaviest rainfall—more than 350 millimeters or nearly 14 inches—appears in dark blue. The lightest rainfall—less than 50 millimeters or 2 inches—appears in light green. Trace amounts of precipitation appear in pale yellow. The heaviest rainfall occurs east of Madagascar, but almost equally heavy rainfall occurs along the island’s east coast.

Superimposed on the rainfall is Giovanna’s storm track, with darker shades of red corresponding with a greater storm strength. Before making landfall, Giovanna strengthened to a Category 4 storm. Storm strength dissipated over the island and the Mozambique Channel. Forecasts from the U.S. Navy’s Joint Typhoon Warning Center called for Giovanna to re-strengthen somewhat west of Madagascar, but the storm was not expected to match its prior wind speeds.

This image is based on data from the Multisatellite Precipitation Analysis produced at NASA’s Goddard Space Flight Center, which estimates rainfall by combining measurements from many satellites and calibrating them using rainfall measurements from the Tropical Rainfall Measuring Mission (TRMM) satellite.