The Flood Emergency Project was implemented from 2014 to 2020. It rehabilitated 70 kilometers (km) of the Logone dyke, 27 km of the Maga dam, and partially 7,500 hectares of irrigation schemes. The project also provided training activities and helped generate jobs. Eight water-user associations and around 103,000 people, of which 30 percent are women directly benefited from the project.

In 2012, Northern Cameroon received exceptionally high rainfall, which caused floods in the North and Far North regions. In the Far North region where poverty was already high, the floods caused substantial damages to the hydraulic infrastructure, further weakening the Maga dam. It was estimated that a potential dam failure would have flooded about 150 km² and put at risk around 120,000 local people. The rains and subsequent floods also caused substantial damages to the irrigation infrastructure of *Société d’Expansion et Modernisation de la Riziculture de Yagoua (SEMRY) *and destroyed more than 25km of the Logone dyke. Approximately 60,000 people (1,222 families in the Maga district and 9,025 families in the Logone and Chari district) were affected.

The Flood Emergency Project of $108 million focused on protecting the local people through fixing key hydraulic infrastructure. Multiple innovative solutions helped in the implementation of the project, for example, all resettlement action plans were implemented step-by-step (instead of the usual all-at-once approach) all along the 70 km of the Logone dyke. An effective grievance redress mechanism was in place, which helped receive and address concerns efficiently. As a result, these major works in an area where over 150,000 people live did not cause major or unsolvable grievances from local communities. Additionally, traditional and religious leaders who play a key role in the society in the Far North region, participated in the supervision aspect of the project. It helped communities take ownership of the rehabilitated infrastructures. 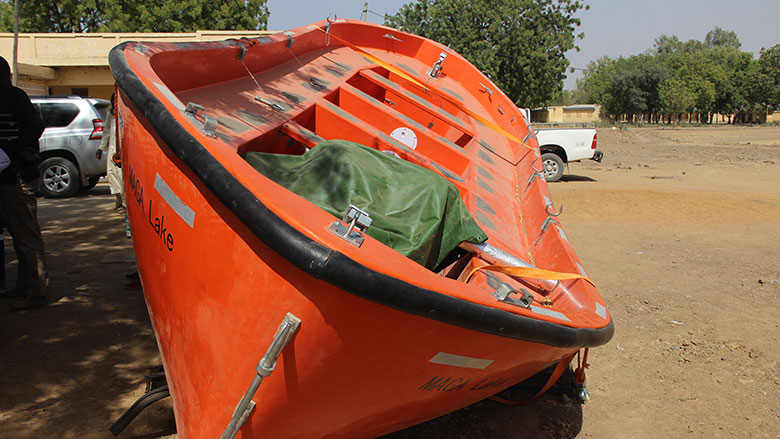 International Development Association (IDA) financing for the project was $108 million. Various trust funds, such as the Global Water and Sanitation Program and the Water Expert Facility, supported implementation and provided multiple experts.

Since 2018, more than 100,000 people who live on the Logone floodplains no longer fear floods and feel secure, thanks to the rehabilitation of Maga dam and Logone dyke. The rehabilitation of irrigation schemes helped local communities increase their revenues, pay school and health care fees, and overall improve their livelihood.

Suzanne is a rice farmer and lives in the village called Djogoidi located in the Far North region of Cameroon. The house she lived in with her family was approximately 50 meters away from the Logone river. Every year, during the two months of rainfall this region witnesses, she as well as the people in her village were living in fear of the flood and what could happen to them if they lost their houses, their herds. Thanks to the project, Suzanne and most of her neighbors, who like her lived near the river, have been resettled into upgraded houses. “With the rehabilitation of the dykes and the resettlement into houses built with cinder blocks, we can now sleep in peace and are not afraid of the heavy rains anymore. My family is safe, my herd is safe and my rice field is secure now.”