Amid the global coronavirus pandemic, Burundi intends to hold local and national elections on 20 May 2020. The reporting of coronavirus cases in the country remains low ahead of the election, but the Burundian Foreign Ministry expelled the top WHO official and three other WHO experts coordinating the coronavirus response (Al Jazeera, 14 May 2020). In addition, political parties held mass gatherings around the country ahead of the polls notwithstanding risks of further coronavirus outbreaks (The New Humanitarian, 13 May 2020).

Reminiscent of previous election periods in Burundi, the months leading up to the vote have been marked by violence among political groups competing for power. Since the formation of the opposition National Congress for Freedom (CNL) party in February 2019, ACLED records a significant increase in violence carried out by the youth wing of the ruling party, called the Imbonerakure, against opposition supporters in general, and CNL members in particular. Unlike the previous election, the geography of violence has shifted from a concentration in urban Bujumbura to a more even disbursement across the rural countryside – a reflection of the CNL’s broad appeal in rural areas previously dominated by the ruling party.

During the last elections held in 2015, political violence largely centered on the disputed legality of a third term mandate for the incumbent President Pierre Nkurunziza of the ruling National Council for the Defense of Democracy–Forces for the Defense of Democracy (CNDD-FDD) (Reuters, 25 April 2015). In the 2020 election, the CNDD-FDD party has decided upon a new candidate, Evariste Ndayishimiye, eliminating concerns Pierre Nkurunziza would remain in office. This has shifted contestation and political focus towards the primary opposition party: the CNL. Both the CNDD-FDD and CNL are political parties based on and led by former Hutu rebels competing for a similar demographic of the voting population. The CNL formed in February 2019 with presidential candidate Agathon Rwasa, a former leader of a rebel and political group called the National Liberation Forces (FNL) during Burundi’s civil war between 1993 and 2005. Following the war, Rwasa became the leader of a political coalition called Amizero y’Abarundi (Burundians’ Hope) before constitutional amendments in 2018 required him to form a new party, which eventually became the CNL (DW, 17 February 2020).

While the shape and dynamics of conflict have changed since 2015, violence involving Imbonerakure continues to endanger political freedoms (ACLED, 18 October 2018; UN News, 10 March 2020). Despite the intense violence of the previous election cycle, general political disorder involving Imbonerakure peaked in 2018. However, the specific targeting of opposition supporters by Imbonerakure has been on the rise in recent years, reaching the peak number of recorded events in the months just before the 2020 election. As opposition parties contend for votes during the lead-up to the elections, there has been a significant increase in violence by the Imbonerakure against opposition supporters, primarily the CNL (see graph below).1 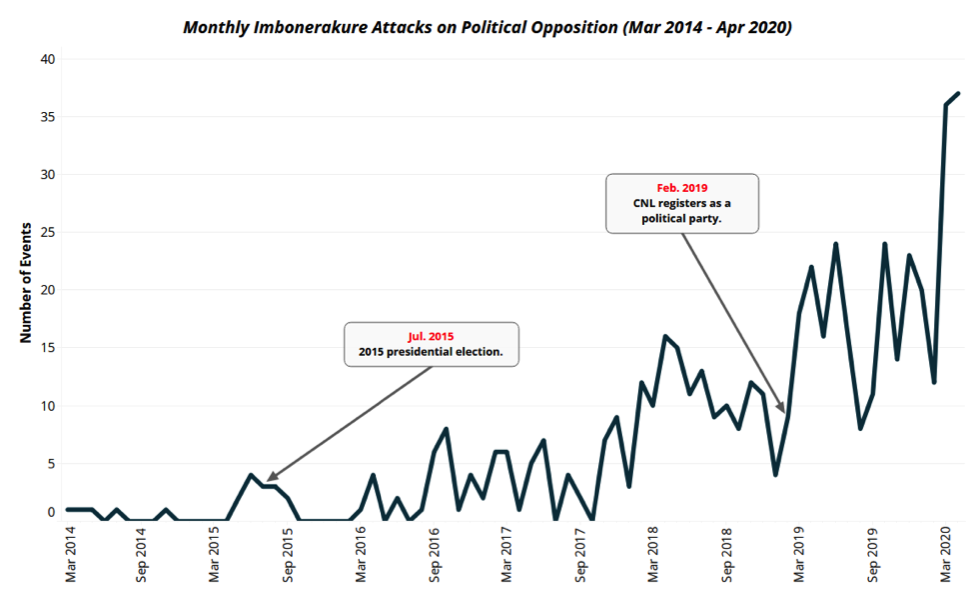 Local government actors supporting the CNDD-FDD often partner with Imbonerakure to coordinate attacks against political targets or to carry out the violence themselves alongside Imbonerakure (HRW, 27 April 2020). Attacks by Imbonerakure occur throughout Burundi, and have included the targeting of civilians attending opposition party meetings, as well as the destruction or looting of political party buildings, homes, and farmland. Police frequently arrest opposition supporters after these attacks, with sweeping arrests reported in Makamba in recent weeks (SOS Media, 8 May 2020). In some cases, CNL members and Imbonerakure or CNDD-FDD supporters fight with one another. Both attacks and clashes primarily result in injuries rather than deaths. Imbonerakure attacks against the CNL comprise the vast majority of these events, with a small minority of attacks targeting other political party supporters.

In 2015, political disorder during the election cycle was more concentrated in the economic and former political capital of Bujumbura. This election cycle has shown a more even dispersal of political violence and demonstration activity across the country (see map below). In the period leading up to the 2015 elections from 21 March 2014 to 21 July 2015, nearly 60% of all political disorder occurred in Bujumbura Mairie. During this 2020 election cycle from 20 January 2019 to 16 May 2020, Bujumbura only accounts for 7% of all events, with the bulk taking place in the hinterlands (see map below). 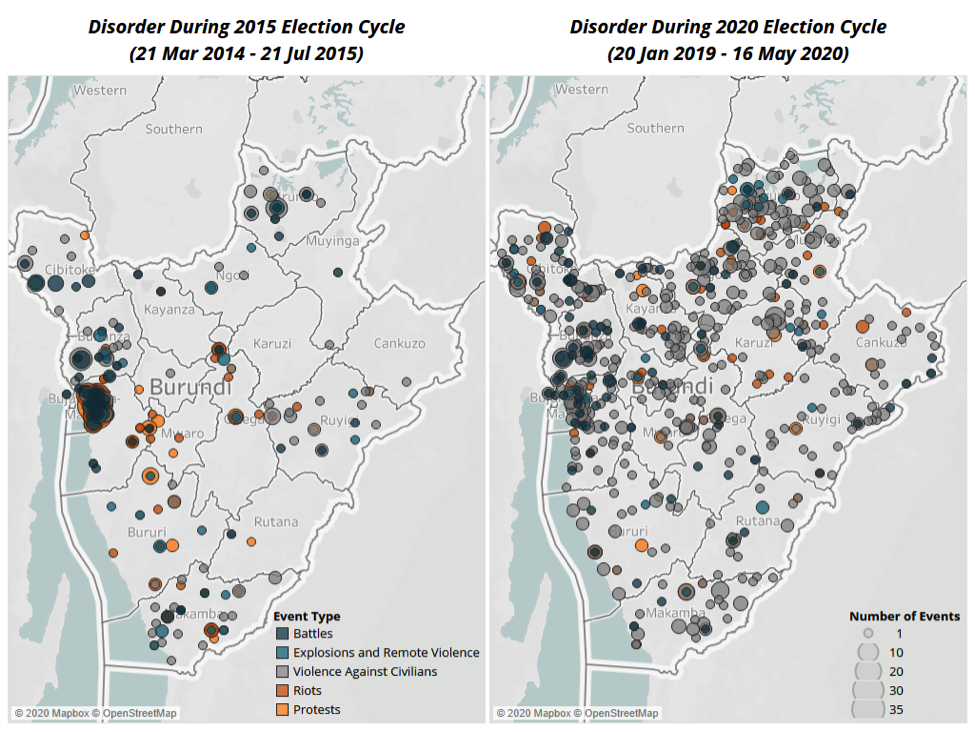 Although the total number of events involving the Imbonerakure peaked in 2018, there has been a significant increase in the average rate of violence by Imbonerakure against opposition supporters by month since the CNL formed in February 2019. Mirroring overall disorder trends, these events occur across the rural countryside with a lower concentration in Bujumbura than in previous election cycles. These shifts demonstrate that the CNDD-FDD perceives the CNL as a significant threat around the country, and that it remains willing to use violence to influence elections.

Ladd Serwat is the Central Africa Assistant Research Manager at ACLED. He is a PhD Candidate at the University of Sussex in International Development, having completed a MSc in African Development with the London School of Economics and a BA in International Relations from Gonzaga University. Ladd’s research focuses on political conflict, customary law, and the political economy of land reform.