Starting on 2nd July 2021, The Gambia has been experiencing a windstorm surge which has, as of 12 July, affected over 16,849 people in more than 100 communities across all seven regions of the country. The situation, which is still unfolding, has caused internal displacement and homelessness. Indeed, over 100 severely injured people have been recorded as a result of fallen walls and trees. On 8 July, the Head of State summoned an emergency meeting while the windstorm was still ongoing, requesting for support from all well-wishers for the affected communities.

As the storm continues, ten deaths have been confirmed as a result of collapsed buildings. According to the Meteorological Department, on 7 July, the windspeed was at 85 km per hour and was the first of its kind to be recorded in the last five years. The unfolding disaster has already caused considerable damage on the lives and livelihoods of the people. Many affected people have “no place to live and nothing to eat” said the Executive Director of National Disaster Management Agency (NMDA) at a press briefing at their head office in Kanifing on 8 July 2021 at 3:00pm, attended by the Gambia Red Cross Society (GRCS) Secretary General and essential staff.

The GRCS, the NDMA and other partners immediately launched a joint rapid assessment which is still ongoing. Preliminary information as of 12 July 2021 from an assessment indicates that more than 16,849 people (approximately 1,057 households) are affected, including more than 1,531 internally displaced persons (IDPs), among whom many are currently being sheltered by relatives and host families. Preliminary information reports the destruction of several houses, schools and health centres and community seed storage facilities in some of the affected villages. However, in the process of developing the Emergency Plan of Action many more reports are indicating a sharp increase in the number of affected people and households throughout the country.

The GRCS has consequently deployed rapid assessment teams to the affected areas/regions. The National Society (NS) is conducting initial distribution of household items to the most vulnerable and dignity packs alongside the assessment exercise.

The Gambia has a sub-tropical climate with sunshine throughout the year with average temperatures between 29°C and 34°C. The rainy season runs from June to September and sometimes beyond. The country has experienced over the past few years extensive downpours causing severe destruction as a result of poor draining systems, afforestation, felling of trees for new settlements (new estate developers) etc., causing floods, destruction and untold suffering. The rainy/farming season has just begun with forecasts indicating intermitted heavy rainfall accompanied by severe windstorms. These imminent precipitations may further complicate the situation and severe consequences on the rural population in particular are expected. (IFRC, 14 Jul 2021)

Twelve people have so far died and more than 109,000 people were affected by the windstorm and flash flood which hit Gambia on 7 July. More losses to food stocks have been recorded, with farmers experiencing erratic rainfalls, requiring increased preparedness by the government and partners related to food security. The National Disaster Management Agency (NDMA) is providing 1,071 households in North Bank and West Coast Regions with US$144 cash transfer, for three months. The Government of The Gambia allocated US$3,600,000, for the storm-related emergency response. Support is needed for the rehabilitation of major critical infrastructures such as schools and hospitals. (OCHA, 10 Aug 2021) 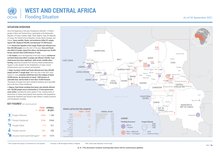 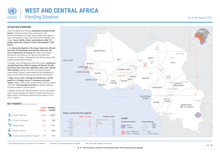 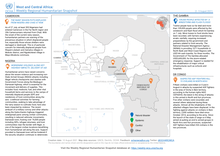