Wildfires have been affecting the Kabylia Region in northern Algeria since 9 August. More than 70 fires have occurred in 13 prefectures in the north of the country including Tizi-Ouzou, Bouira, Sétif, Khenchela, Guelma, Bejaïa, Bordj Bou Arreridj, Boumerdès, Tiaret, Medea, Tébessa, Blida and Skikda. According to media reports, more than 40 people have died as a result of the fires. The Algerian government has requested assistance from the international community in response to the fires, including through the EU Civil Protection Mechanism on 11 August for two Canadair aircraft to respond to fires in the Tizi Ouzou and Bejaïa regions. According to the European Forest Fire Information System (EFFIS), the fire risk will remain high to very extreme over the affected area. (ECHO, 11 Aug 2021)

Fires raged in north and north-east of Algeria overnight on Monday 9 August 2021, and throughout Tuesday 10 August 2021, killing at least 69 people including 28 members of the People's National Army deployed as firefighters, rescuing over 100 people in Bejaia and Tizi-Ouzou. The governorates of Tizi-Ouzou, Bouira, Sétif, Khenchela, Guelma, Bejaia, Bordj Bou Arreridj, Boumerdes, Tiaret, Medea, Tebessa, Annaba, Souk Ahras, Ain Defla, Jijel, Batna, Blida and Skikda were affected by the fires. Algeria’s National Meteorology Office forecasted extremely hot weather through 12 August in nearly a dozen wilayas (governorates), including Tizi-Ouzou. The temperature was expected to reach 47 degrees Celsius in those wilayas, which are already suffering from severe water shortages. The Algerian Government mobilized the People’s National Army, dispatched 12 fire engines, and mobilized more than 900 firefighters to put out the fires and protect people and property. (IFRC, 18 Aug 2021)

On 25 October, the Algerian government launched a national tree planting campaign for 19 million trees across the affected governorate by the fires, in addition the government launched an online platform for rehabilitation of forests affected by the recent fires in order to enable citizens and civil society organizations to participate and volunteer in this program. To date, there is a need to provide safe drinking water and sanitation to the populations in the proposed shelters as part of the essential preventive health actions to avoid outbreaks. Hygiene supplies must be provided to the families in order to maintain proper hygiene conditions in the shelter sites. Due to the increased risk of heatstroke or heat exhaustion during extended exposure to high temperatures, heatwaves also pose a hazard to vulnerable groups such as the elderly, children, pregnant women, and those with respiratory illnesses. These health risks may also extend to relatively healthy individuals during significant heatwave events. (IFRC, 30 Oct 2021) 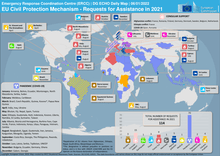 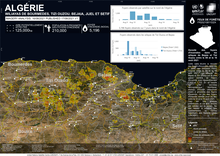 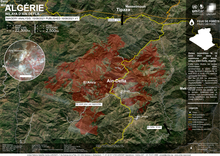