A forest fire that started on 23 March in the 8,000-hectare U Minh Thuong National Park in the southern province of Ca Mau is believed to have destroyed over 4,000 hectares of virgin forest. Temperatures in the heart of the forest have soared to 50 degrees Celsius in the 0.5 to 1.5 metre-thick smouldering peat and coal layers. (OCHA, 9 Apr 2002)

According to media reports, torrential rain on 10 April helped extinguish the forest fire in U Minh Thuong National Park in the southern province of Kien Giang. However, another fire started on 12 April in U Min Ha Forest, which is the same forest but located in Ca Mau province. The new fire in U Min Ha Forest has ravaged about 3,000 hectares of 12-year old cajeput trees, threatening another 10,000 hectares, including the Vo Doi virgin forest 3 kilometres away. (OCHA, 19 Apr 2002)

A major forest fire that began on 12 April has been burning for over a month. The fires had been mostly contained, due to the efforts of up to 5,000 fire fighters, but had not been completely extinguished due to extreme drought conditions and high winds. The situation worsened again on 4 May with the eruption of new fires, which reportedly destroyed an additional 1,200 hectares of vegetation. (OCHA, 6 May 2002) 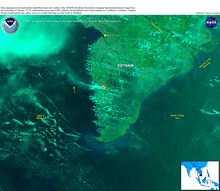 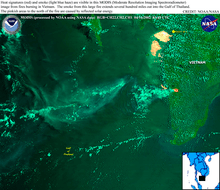 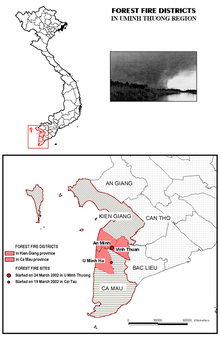