The remote Kadovar Island volcano became active on 5 January 2018 with mild volcanic activity on the south-eastern side of the island. The aerial assessment estimated 50-60 percent of the island covered in lava. The entire population (591 people) has been relocated to Brup Brup island. Rabaul Volcanological Observatory (RVO) has assessed that there is a possibility for Kadovar to explode which could trigger similar explosions on near by volcanic islands of Brup Brup and Biem. This may also trigger a tsunami due to landslides. (IFRC, 9 Jan 2018)

As of 15 January 2018, there is an immediate need for food, water, shelter and clothing due to the evacuation of entire population of Kadovar Island to Brup Brup Island (population 1,400). The Prime Minister’s Office is supporting the provincial government to provide 2,000 people with food and water. Meanwhile, the Provincial Government is planning to evacuate the entire population of Kadovar, Brup Brup and Biem islands (up to 4,000 people) to a site on mainland East Sepik due to risk of tsunami, and the potential for a further eruption on neighbouring Biem Island. (OCHA, 15 Jan 2018)

According to the Provincial Governor, the Government is planning to resettle Kadovar islanders on the mainland for up to three years, and will provide support to those who are displaced. The National Capital District Commission has donated Kina100,000 (US$31,000) to the ongoing relief efforts while several private sector companies have provided in-kind contributions including flour, rice and sugar. (OCHA, 22 Jan 2018)

As of 26 January, the Rabaul Volcanological Observatory (RVO) has indicated that the situation on Kadovar remained dynamic but has settled into a reasonable stable situation. There remained a small risk of tsunami to the mainland and neighbouring islands should the volcanic structure collapses. The National Disaster Centre has developed a PGK4 million response plan ($1.21 million) to meet the assessed needs of Kadovar islanders at Dandan Care Centre for up to six months. (OCHA, 27 Jan 2018)

As of 20 March, there are a total of 557 affected population from the villages of Manot, Taragauo, Dong Sarakbano, Niukatnam and Rumgio staying at the Dan Dan care centre. It is anticipated that the affected population will remain at the care centre for the next three to six months before being resettled at a larger permanent site. This requires the Provincial Government to finalise details with the host community that is providing land and ensure that payment is made to the community for the land before the population of Kadovar will be able to resettle permanently. (IFRC, 20 Mar 2018) 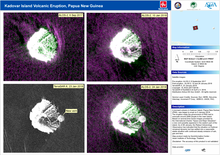 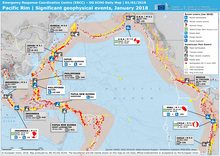 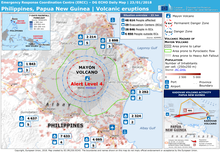