Indonesia's Mt. Kelud volcano erupted on 13 Feb 2014, causing volcanic ash to drift across Java. Over the first few days, the eruption affected 201,228 people (58,341 families) from 35 villages in three districts: Blitar, Kediri, and Malang. The Governor of East Java declared a state of emergency until the 14 Mar. By 14 Feb, seven deaths had been recorded. The number of displaced people had reduced to 100,248, who had evacuated and camped across the province in 172 camps set up to cater for their basic needs. Over the following days, some of the displaced moved and found refuge with family and friends. By 18 Feb, a total of 83,088 people from 40 villages were still in the camps. Almost 30,000 houses and public buildings have been inundated with ash, with over 11,000 destroyed. On 20 Feb, the National Volcanology Centre decreased Mt. Kelud’s alert status from the highest level IV (Danger) to level III (Alert), with a 5km exclusion zone from the crater. People were urged not to carry out any activities within the 5km radius of the crater and along the river banks, and to be vigilant to the possibility of cold lava flows. (IFRC, 3 Mar 2014) 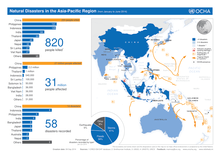 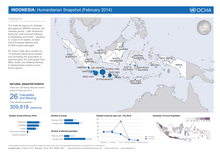 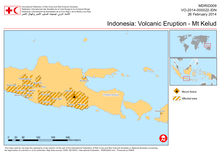