Mt. Sinabung erupted for the first time after 400 years on 29 August 2010. (IRIN, 27 Sep 2010) Subsequent eruptions throughout August and September led to the evacuation of 26,137 people. The resulting ash and debris from these eruptions affected 25 villages in three sub-districts within the radius of six kilometers. The most affected areas were the villages in Namanteran Tigaderket and Payung sub-districts. It was reported that these eruptions caused one serious casualty, 35 inpatients and 8,522 outpatients. (IFRC, 8 Mar 2011)

On 3 September 2010, the IFRC allocated funds to support the Indonesian Red Cross in delivering immediate assistance to about 5,000 IDPs. The IFRC completed the operation on 30 November 2010 as the eruptions subsided and the displaced were assisted to return to their homes. (IFRC, 8 Mar 2011) 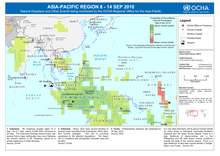 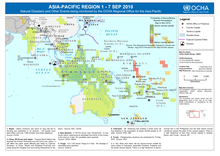 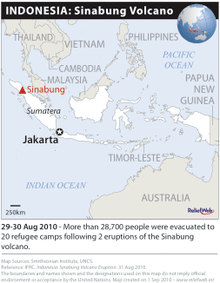