An 8.0 magnitude earthquake struck off the coast of the Santa Cruz Islands in the southeast Solomon Islands archipelago on 6 Feb 2013. A 0.9 to 1 meter tsunami wave reached the islands in Temotu Province and a tsunami wave of 8 centimeters reached the capital Honiara. 10 people were killed. Almost 600 houses were destroyed, affecting 3,329 people. Thirteen camps have been established to shelter almost 2,500 people. The supply of drinking, cooking and washing water is becoming increasingly scarce as wells have been contaminated or sources and piping are damaged. (OCHA, 11 Feb 2013)

A Humanitarian Action Plan drafted by the Solomon Islands Government and humanitarian partners was presented to donors on 7 Mar. In total, 36 activities have been identified addressing humanitarian needs in seven sectors. The total requirement is SB$38 million, of which $24 million remains unmet. A further $30.8 million has been identified for five reconstruction activities. 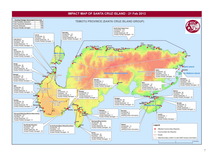