Between 16 September to 18 September, Fiona crossed the Eastern Caribbean with Tropical Storm force causing minor damage except for in Guadeloupe where it caused the death of one person and left considerable damage to infrastructure. As the system approached Puerto Rico and the eastern coast of the Dominican Republic, Fiona gained Hurricane Force and damaged infrastructure, power outages and road blockages due to debris. Sustained heavy rainfall produced significant and life-threatening flooding.

In Puerto Rico, according to the Federal Emergency Management Agency (FEMA), heavy rainfall of as much as 25 inches, caused life-threatening mud and landslides while Fiona's rain bands continue to cause urban and rural flooding as the system moves north. According to international media outlets, at the height of the impact of Fiona, the entire island of Puerto Rico was left without power, leaving over three million people without access to electricity.

In Dominican Republic, national authorities confirm some 13,000 people were moved to secured areas (moved to neighbors, friends or families) while over 1,500 people are currently in 49 emergency shelters. Close to 1.17 million people are currently experiencing water supply issues related to impact to water systems while power outages are affecting more than 400,000 people. (OCHA, 20 Sep 2022)

According to UN OCHA, UNICEF and the Federal Emergency Management Agency (FEMA), in Puerto Rico four people died and almost 1,360 have been sheltered. In the Dominican Republic, two others died, 13,760 have been displaced and more than 1,000 sheltered. Moreover, UN OCHA reports one fatality and widespread damage to infrastructure in Guadalupe. (ECHO, 21 Sep 2022)

On Monday, 19 September at 3:30 a.m., hurricane Fiona entered the Dominican Republic as a category 1 with strong winds of up to 150 km/h and heavy rains producing landslides, fallen bridges, road blockages, power outages, interrupted telecommunications, and overflowed dams, among other effects. According to Situation Report No. 44 issued by the Emergency Operations Center (EOC), and as detailed in the map below, twelve provinces have suffered the most damage so far because of Hurricane Fiona's passage through the country. The report indicated that 2,614 homes were affected, 457 partially affected and 4 destroyed as well as 2 people dead and over 12,000 people displaced. (IFRC, 26 Sep 2022) 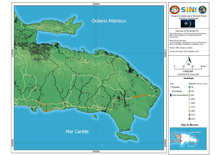 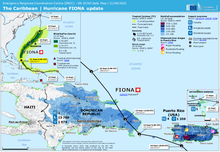