The Tropical Storm (TS) initially named SIX that developed in the northern Indian Ocean has now been assigned the name PAWAN after sustaining a speed of more than 39 miles per hour for two days. The probability of the TS landing in the coastal areas of Puntland has increased from (10% TO 35%) over the last two days and is expected to make a land fall in Nugaal region in the next 24 hours.The influence of PAWAN may start being felt in the coastal areas of Bari, Mudug and Sanaag regions in the next 12 hours where moderate to heavy rains and strong winds are expected. The rains will then spread further inland to many areas within Somaliland, Puntland and central regions on 07 and 08 December 2019. (FAO, 6 Dec 2019)

As Pawan turns and tracks towards Somalia, it is expected that the strength will intensify. Under the current conditions, Pawan is expected to make landfall within the next 30 hours and based on the current trajectory, the cyclone will make landfall in Puntland and some parts of Somaliland, namely Awdal and Sannag regions. Strong winds, storm surges and heavy rainfall are expected to cause flooding and trigger landslides, resulting in casualties, as well as damages to crops livelihoods, livestock, infrastructure and housing. Based on the current trajectory, the tropical cyclone could make landfall affecting the Bosaso IDP Camp in Bari Region of Puntland. The total population of the three provinces most likely to be affected is 2.3 million, however it is difficult to estimate the proportion that live on the coast, as some 65% of the population are nomadic. (IFRC, 6 Dec 2019)

Heavy rain in the last 5 days has affected northern, central and coastal Somalia. On 7 December, Puntland coast was affected by Tropical Storm PAWAN and 2 people died following floods in Las Qoray (Sanaag Region). Roads connecting the town to the rest of the region have been damaged. In central Somalia, the overflow of the River Shabelle flooded Afgooye district, displacing over 1,500 people. (ECHO, 10 Dec 2019)

Between 6 to 8 December 2019, TC Pawan caused flash floods and Pawan-related storms in the Puntland. TC Pawan has displaced communities, impacting access to basic health services, which has left affected communities exposed to diseases. The most affected households need urgent humanitarian assistance as they are currently in dire living conditions. Damage was also sustained to IDP settlements, infrastructure and social services such as roads, schools, as well as telecommunication towers and electrical installations. The worst hit areas include Nugaal Region (Eyl and Dangorayo Districts), Karkaar (Qardho District) and Bari Region (Alula, Iskushuban, and Baargaal). Other areas affected include the coastal villages in Bari Region including Hafun, Iskushuban, Baargaal, Quandala and Alula districts. (IFRC, 20 Dec 2019) 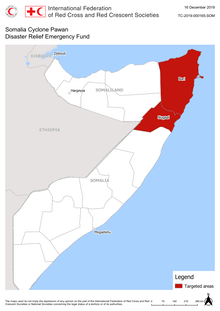 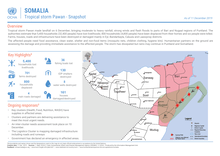 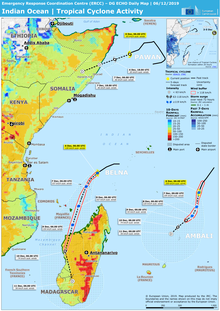