Following the Southwest Monsoon season (25 May - 21 October this year) heavy rains triggered floods in Kerala State (India), resulting in casualties and damage. According to the national authorities, as of 6 November, the death toll stands at 504, 3.4 million people were displaced in 12,300 relief camps, more then 110,000 houses were damaged and 23 million people affected. (ECHO, 9 Nov 2018)

The cyclone Gaja has set the tone towards the end of North East monsoon in India. A low pressure intensified into a cyclone made its landfall during the early hours on 16 November 2018 had hit six districts in the southern state, Tamil Nadu, namely Nagapattinam, Tiruvarur, Thanjavur, Pudukottai, Dindigul and Ramnad. The wind speeds reached as high as 120 kmph during its landfall. A major disaster was averted due to the elaborate preparedness measures taken by the government supported by the civil society organizations. Approximately 150,000 vulnerable people were evacuated to relief camps along the coastal areas and fishermen were not allowed to go fishing. Despite elaborate preparedness measures, the wind speed and heavy rains have caused deaths, damages to houses and public infrastructure. (IFRC, 23 Nov 2018)

On 15 December, Tropical cyclone PHETHAI formed over the southern Bay of Bengal and started moving north-west toward Andhra Pradesh State with maximum sustained winds of 83 km/h (ECHO, 17 Dec 2018). On 17 December, it made landfall close to Katrenikona town (coastal north-east Andhra Pradesh) as a tropical storm. One person was reportedly killed in the East Godavari District (ECHO, 18 Dec 2018).

According to the Tamil Nadu government, approximately 250,000 people evacuated to 493 relief camps due to Cyclone Gaja which made landfall on 16 November 2018. The death toll stood at 45. It was also reported that more than 115,000 houses were damaged or destroyed. The Government of India and affected state governments are leading the response. (IFRC, 6 Feb 2019). 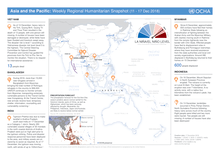 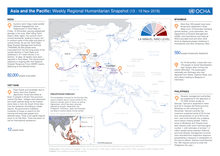 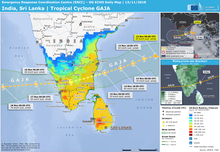