On 20 Dec 2017, Tropical Depression "Vinta" (local name) has intensified into a tropical storm as it continues to track westward with maximum sustained winds of up to 65 kph. Scattered to widespread moderate to heavy rains is expected over Eastern Visayas, Caraga and Davao Region within 24 hours. The storm is expected to make landfall over Caraga - Davao Region area between Thursday (December 21) evening and Friday (December 22) morning. (Govt. of Philippines, 21 Dec 2017)

Tropical Storm Tembin crossed the Sulu Sea in the morning of 23 December, having passed across the southern Philippines island of Mindanao. The storm triggered mudslides and flooding causing more than 200 fatalities according to local media. 172 people are reported missing as well. According to International Federation of Red Cross and Red Crescent Societies (IFRC), 70 000 people have been displaced. The most affected areas are in three of the regions in Mindanao. Northern Mindanao is the most affected with the massive flooding in Lanao Del Norte and in Cagayan De Oro City. (ECHO, 24 Dec 2017)

Several provinces in the island of Mindanao, Philippines, are reeling from the effects of Tropical Storm Tembin (local name: Vinta), which made landfall on Friday 22 December and exited Philippine landmass on Saturday 23 December 2017. The tropical storm has left a trail of destruction, including killing more than 170 people, displacing thousands, damaging houses and livelihoods, and disrupting normal lives of people mainly in northern and central parts of Mindanao. According to the seventh Disaster Response Operations Monitoring and Information Center (DROMIC) report issued by the Department of Social Welfare and Development (DSWD), the storm has affected at least 313,498 people in 998 barangays in regions MMAROPA, VII, IX, X, XI, XII, ARMM and CARAGA. (IFRC, 25 Dec 2017)

As of 2 January, 2018, over 77,000 people are staying in 72 evacuation centres in affected areas, while over 27,000 people are being hosted by friends and relatives. The NDRRMC has reported the deaths of the deaths of 165 persons, with the numbers expected to rise as search and rescue teams attempt to locate 163 missing persons believed to be buried in mud or swept away by flood waters (OCHA, 4 Jan 2018)

Most recent reports indicate that Tembin damaged 6,850 houses in 12 provinces, of which more than half were totally destroyed. As of 6 January 2018, 75,880 people remain inside 53 centres. Furthermore, conflict affected communities, IDPs and returnees to Marawi City, Lanao del Sur were also affected and remain vulnerable. (IFRC, 20 Jan 2018) 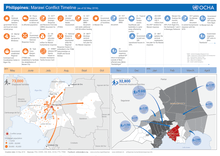 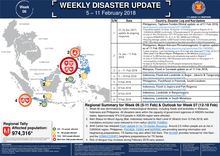 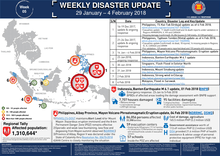