On 3 May 2017, Fiji Meteorological services provided an early alert for a tropical disturbance (TD21F) which was forming north of Vanuatu. The tropical disturbance developed into Tropical Cyclone Donna (TC Donna), a Category 1 system, around Wednesday midnight. TC Donna had intensified into a Category 3 system in the evening of 5 May local time. It was located about 175 KM west of Torres and 300 KM west northwest of Gaua (Torba Province) in Northern Vanuatu. The Government of Vanuatu raised the alert levels across the northern provinces...Public alerts were issued over radio and via mass text messages sent out by Telecom Vanuatu and Digicel. (IFRC, 5 May 2017)

As of 6 May 2017, Torba Province in Northern Vanuatu was the most affected area. According to a quick rapid assessment with Community Disaster Committees on the four islands (Loh, Hui, Tegua and Toga), significant number of houses have been either totally destroyed or damaged. On Loh island, almost all people are sheltered in an evacuation center. (Govt. Vanuatu, 6 May 2017)

On 8 May, Tropical Cyclone Donna intensified into a Category 5 storm (winds of up to 215 km/h near the centre and gusts of 300 km/h) as it continues to move across Vanuatu towards New Caledonia. Over the weekend, Torba Province, with a population of about 10,000 people, was severely hit...Preliminary reports indicate significant housing damage; however, communication remain disrupted. The National Emergency Operations Centre was activated and is coordinating the in-country response. No fatalities have been confirmed. On 5 May, the Pacific Humanitarian Country Team offered international assistance to the Government and remains on standby to provide support. (OCHA, 8 May 2017)

Tropical Cyclone Donna has passed out of the Vanuatu region and the National Disaster Management Office (NDMO) gave the all clear on the 9th of May...The Torres Island group in Torba Province remains the most affected area, with other areas in Torba less affected. (Govt. Vanuatu, 10 May 2017)

The information obtained by the assessment team will be used by the NDMO on Monday (15/05/17) to draft a ‘phase 2’ relief plan. This plan will be presented to clusters and partner agencies on Tuesday (16/05/17) at the Inter Agency Meeting...Clusters are continuing to make initial remote assessments, preparing response plans and gathering information on available resources for response. This information should also be shared with the NEOC. The NDMO is also considering the need for a long-term recovery plan for community infrastructure (such as schools) damaged during Tropical Cyclone Donna. (Govt. Vanuatu, 12 May 2017)

As part of the phase 2 activities, the NEOC worked with partners to source the needed supplies which were transported by the Vanuatu Patrol Boat ‘RVS Tukoro’ which was supported by the Australian Government. The vessel departed Port Vila on 16th May 2017 and will deliver supplies to Hiu, Metoma, Tegua, Loh and Toga Islands. Supplies included personal hygiene kits, tarpaulins, shelter kits, teacher tents, water kits, jerry cans and planting materials. The Provincial Disaster Office vessel from Sola will be taken to Torres to assist with relief operations. Reports were received from Hiu on Sunday 14th May 2017 regarding contaminated water and increased cases on diarrhoea. The NDMO sourced 200 cartons of water which was transported to Hiu by the French Navy Patrol Boat ‘La Gloriuese.’ The vessel departed Port Vila that afternoon and delivered the water to Hiu on 16th May 2017. (Govt. Vanuatu, 17 May 2017)

A shelter cluster team assessment report, dated 14 May 2017, identifies the total number of households in Torres to be 190 (population: 1,006). Based on the advice and experience of VRCS in the region, VRCS proposes that, for the purposes of planning the NFI distribution and to enable flexibility within the response, this figure be rounded to 200 households (IFRC, 19 May 2017) 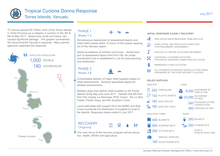 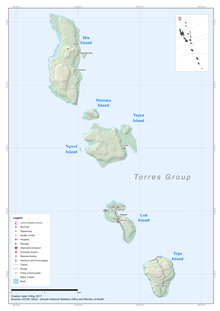 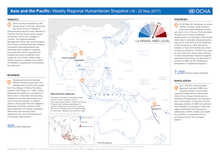