On 18 December, a tropical system entered the Philippine area of responsibility (PAR) and made landfall over the municipality of Manay in Davao Oriental province, eastern Mindanao. It weakened into a low pressure area (LPA) after landfall but continued to bring rains, including in areas that were recovering from the effects of Melor. An Emergency Appeal launched on 22 December to provide CHF 3.7 million in assistance to 45,000 people. (IFRC, 22 Dec 2015)

The IFRC launched a revised Emergency Appeal on 4 March 2016 for CHF 2,079,515 to support the Philippine Red Cross (PRC) in delivering assistance to 45,000 people over 12 months, with a focus on the following sectors: emergency relief and shelter, recovery shelter, health, livelihoods, water and sanitation.

Based on field reports, the Government-led Response Cluster stated in December 2015 that 2,711 families were affected by Tropical Depression Twenty Three. In early February 2016, all evacuation centres were closed, and planned relief distributions completed. Some early recovery interventions have been started by Government units, civil society organizations and NGOs, but these are limited and there are still pressing humanitarian needs in shelter and livelihoods. Families have returned to repair their damaged or destroyed houses but many construct unsafe makeshift shelters from salvaged materials. Many have lost their livelihoods and are concerned about family income over the coming months. (IFRC, 4 Mar 2016) 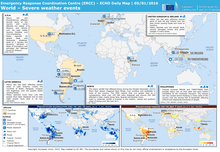 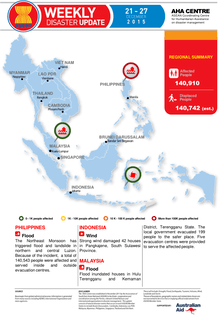