Typhoon Utor (locally known as Labuyo) made landfall over Aurora province in the eastern part of the Philippines' Central Luzon region in the early morning of 12 Aug 2013 with a category 3 status, affecting 281,700 people in 16 of the countries 80 province. Eight people were killed and almost 60,000 left their homes and took shelter. Over 12,000 houses were damaged of which 1,440 (or about 12 per cent) were destroyed. (OCHA, 15 Aug 2013)

In China, heavy rains and flooding caused by the typhoon affected 4 million people in the southern Guangdong Province, with 20 people killed and seven missing. 513,000 people were relocated and 19,000 houses were damaged. The national Government has launched an emergency response to help disaster relief. (OCHA, 19 Aug 2013) 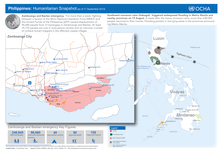 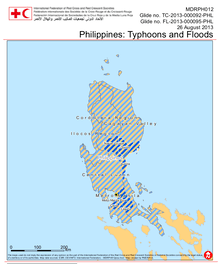