TC Evan was upgraded to a Category 4 tropical cyclone on 15 Dec just as it passed on the top of Wallis Island, part of the French Territory of Wallis and Futuna, damaging the houses of 250 families (OCHA, 19 Dec 2012).

On 17 Dec, TC Evan reached Fiji as a Category 4 storm, causing widespread destruction of infrastructure and loss of property. The Government of Fiji declared a state of natural disaster for the Northern and Western Divisions. At the beginning of the emergency, there were approximately 10,000 people in more than 150 evacuation centers. As of 11 Jan 2013, 106 people remain in 11 evacuation centers. (OCHA, 11 Jan 2013) The Government launched the 2nd edition of the Humanitarian Action Plan on 8 Feb (Government, 8 Feb 2013). 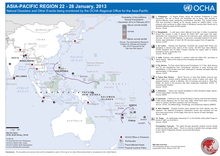 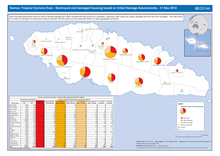 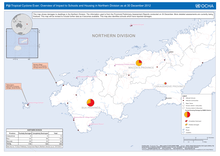