Typhoon Haikui, which made landfall in Zhejiang on 08 Aug 2012, has brought heavy downpours to east China and killed three people there. In neighboring Anhui province, the typhoon has left one person dead and forced 26,000 others to be evacuated.

In Zhejiang province, the typhoon has affected more than 4.03 million people and caused economic losses of more than 10 billion yuan (1.57 billion U.S. dollars), the provincial flood control and drought relief headquarters said, adding that the typhoon has also destroyed 4,452 houses and damaged about 184,800 hectares of cropland. In Jiangsu province, 180,500 people have been relocated and more than 18,567 ships were ordered to return to port before the rain began. (Xinhua, 08 Aug 2012) 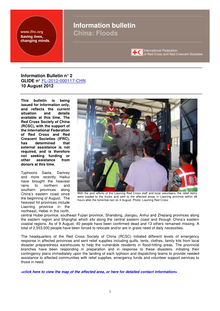