On 31 Oct 2009, typhoon Mirinea, locally know as Santi, made a landfall over Quezon Province, Region IV-A of the Philippines with maximum sustained winds of 150 kph and gustiness of 185 kph. A total of 23,101 families /115, 507 persons were pre-emptively evacuated in 251 evacuation centers while others stayed with their relatives and friends in Regions NCR, IV-A and V. (Government of the Philippines, 31 Oct 2009)

Typhoon Mirinae caused widespread communications problems and power outages. Much of Metro Manila was without power for more than 24 hours and internet and cellular telephone connections were temporarily cut. Typhoon Mirinae also caused transportation delays on the weekend of a national holiday. Air traffic and ferry traffic were delayed/cancelled and the population was advised not to travel on this holiday weekend. (OCHA, 3 Nov 2009) 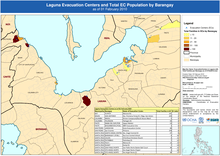 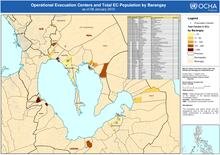