Tropical storm "Eric" descended on the regions of Sofia, Sava, Atsinanana, and Analanjirofo in the north-east of Madagascar at 8 am on 19 Jan 2009, carrying heavy rain and winds at the speed of up to 95 km/h. Landing in the district of Fenerive-Est, "Eric" edged southwards through the districts of Fenoarivo Atsinanana, Sainte-Marie, Vavatenina, Ambositra, Toamasina I, Antsohihy, Mampikony, and Mandritsara,veering off into the Indian Ocean by 2 pm. Approximately 1,000 persons remained homeless with another 1,700 persons impacted to varying degrees by the tropical system. One person died and 24 were injured. (OCHA, 22 Jan 2009) 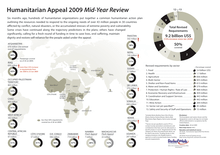 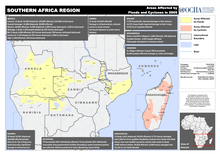 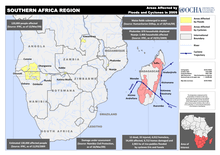