A low-pressure system formed in the south-west part of the Indian Ocean over the past days, crossing over Madagascar on 22 January.The system entered the Mozambique channel on 23 January and evolved into a moderate tropical storm, named Ana, making landfall in Nampula province on 24 January. Tropical storm Ana, whose force has already been perceived in some provinces, could cause windspeeds up to 100km/h and rains up to 200mm/24h, potentially impacting the northern and central provinces of Nampula, Zambezia, Sofala, Manica, Tete, Niassa, and Cabo Delgado. Over the coming day, heavy rains and strong winds could cause population displacements, flooding and damages to public and private infrastructures. An estimated 500,000 people may be impacted across the three provinces of Nampula, Zambezia and Sofala, including 120,000 women and girls of reproductive age (aged 10-49) and 14,000 pregnant women, according to national authorities. (OCHA, 24 Jan 2022)

Tropical storm Ana made landfall in Angoche district, Nampula province on 24 January and subsequently headed westwards, affecting the northern part of Zambezia province and the southern part of Tete province [,,,] According to INGD, the storm already resulted in some 4,000 people affected, 66 people injured and five people killed. A total of 546 private houses were also partially destroyed while 115 were totally destroyed. Moreover, one health center and 16 classrooms were affected. On 25 January, a general power cut has been reported in the provinces of Zambezia, Nampula, and Cabo Delgado, following damages caused on the main electricity line. In Tete province, the bridge over the Rovubue river, between Tete Sede and Moaztize, collapsed due to the heavy flow of water. In Nampula, the connection between Nampula Sede and Angoche has been interrupted due to the overflow of the Luazi River. In Zambezia, the Licungo River exceeded the alert level, causing moderate to high floods in the districts of Mocuba, Maganja da Costa, and Namacurra. Moreover, several roads are under the water and two bridges have been destroyed between Mocuba and Lugela. Over the past 24 hours, tropical storm Ana turned into a tropical depression system, according to the National Institute of Meteorology (INAM). However, serious concerns remain about widespread floods, displacements, damages to critical public infrastructures, private houses as well as the interruption of basic services, as heavy rains and strong winds continue to hit. (OCHA, 25 Jan 2022)

On 25 February, a Malawi-specific Flash Appeal was released, calling for US$29.4 million for humanitarian partners to target close to 542,000 people. The appeal aims to mobilize humanitarian action in support of the Government-led response, and is directly complementary to the Government’s own relief efforts. (OCHA, 26 Feb 2022)

As per final analysis, following the passage of tropical storm Ana, 185,429 people were affected, 207 people were injured, and at least 38 people died. The storm destroyed 11,757 houses and damaged 26 health centers, 25 water supply systems, 138 power poles, and 2,275 km of roads, according to the latest data released by INGD. It affected 126,265 hectares, with serious concern about the impact on crop production and food security. In fact, according to Fews Net, households impacted by tropical storm Ana are expected to face stressed (IPC2) and crisis (IPC3) levels of food security in the upcoming months. The storm also damaged 781 schools and destroyed 1,608 classrooms, impacting a total of 209,581 students. Tropical Storm Ana also caused the displacement of some 2,200 Mozambican families, mostly from the districts of Mutarara (Tete) and Morrumbala (Zambezia), to the district of Nsanje in Malawi, according to recent data published by INGD. T (OCHA, 2 Mar 2022) 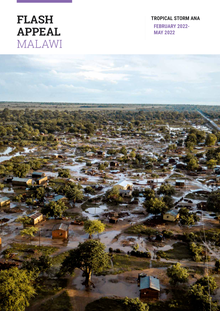 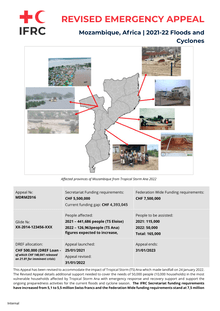 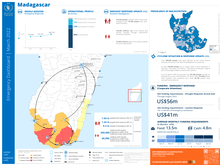 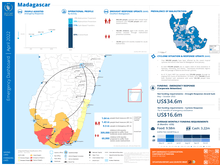 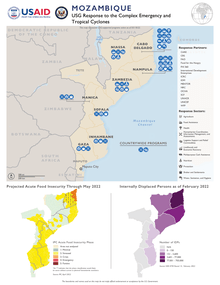