Qatar Red Crescent Society (QRCS) has responded to the heavy rain and subsequent floods in northern Syria, which affected thousands of internally displaced people (IDPs) in 22 camps across five towns of Idlib and Aleppo Governorates.

In response, QRCS's representation mission in Gaziantep, Turkey, activated its disaster information center to manage the emergency response. It coordinates with United Nations agencies, as well as local and international relief providers, to monitor the movement of IDPs, evacuate the submerged camps, and secure transportation and shelter. (Qatar Red Crescent Society, Dec 31 2018)

Lebanon started feeling the effects of a heavy storm on Sunday 6 January 2019. Heavy rain, high winds and colder temperatures were reported all over Lebanon. Some regions were affected by either floodings, erosions or heavy snow. This situation reports highlights the impact of the storm on Syrian refugees and response that followed. 50,000 refugees living in around 850 informal settlements could be affected by floodings.

The impact of the storm ‘Norma’ has necessitated the activation of an extreme weather response over the weekend following referrals received and forecast indicating a drop in temperatures, with snowfall at lower altitudes. Assessment of damage is underway and response has started to affected areas. Extreme weather response is being coordinated by MoSA and UNHCR through the Inter-Agency coordination mechanism.

At minimum 66 informal settlements have been found heavily impacted by the flooding, 15 of which have been completely flooded or collapsed. Around 300 refugees have been relocated so far in the North and the Bekaa. No injuries or casualties have been reported to date. (UNHCR, 7 Jan 2018)

Storm "Norma" has caused damages to infrastructure, roads and homes across Lebanon, putting at least 70,000 refugees at risk, more than half of whom are children, based on the latest humanitarian update. "The storm has caused the collapse of many tents and flooding of several informal settlements to the points that refugees had to evacuate to alternative locations," says Giovanni Rizzo, the Norwegian Refugee Council’s (NRC) Area Manager in Bekaa. (NRC, 10 Jan 2019)

At least 700 Syrian refugees have been evacuated and 900 Syrian refugees are displaced by the impact of the storm (IFRC 9/1/2019; Syria Direct 9/1/2019;). Akkar, Baalbek-Hermel and Bekaa governorates are worst hit by heavy snowfall and flooding. Priority needs are shelter, winterisation kits including blankets, warm clothes, and heating fuel as well as health, WASH and food assistance. (ACAPS, 13 Jan 2019) 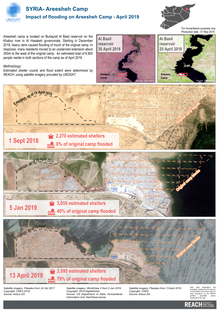 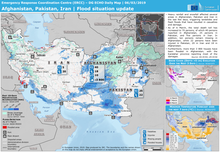 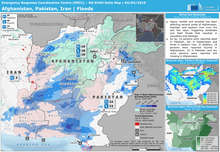