Cyclones Eline (mid-February, 2000) and Gloria (early-March, 2000) hit the central and northern regions of Madagascar, leaving 184,000 people in need of immediate relief support out of a total of 737,000 affected. (IFRC, 5 Mar 2001) The worst affected areas were northern and central parts of the East Coast including the areas around the cities of Andapa, Antalaha, Vatomandry and Mahanoro, as well as Belo-Tsiribihina and Morondava on the West Coast. Some 114 villages and cities were said to be isolated by the floods or destruction of the transport infrastructure. (FAO, 13 Mar 2000) 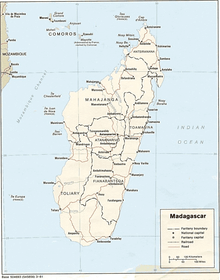