On the night of 31 March 2017, increased rainfall caused the Mocoa, Sangoyaco and Mulata Rivers to overflow, which in turn generated a mudslide in the municipality of Mocoa, capital of the department of Putumayo. UNGRD reported that the affected area received 33 per cent of its monthly total of rainfall (130 mm of the 400-mm monthly average) on the night of the disaster. Per reports, 273 people perished and 262 are injured; injured residents have been treated, and the most serious cases have been transferred to medical centres in Neiva, Popayan and Bogota. There have been 399 Restoration of Family Links (RFL) requests, 25 homes have been destroyed and more than 300 families have been affected. According to the latest official report from the UNGRD-coordinated national crisis room, 17 neighbourhoods were affected (29 blocks), with the greatest devastation seen in the districts of San Fernando, San Miguel, Independencia, Chaparros, San Agustín, Naranjito, Pablo VI, Avenida 17 de Julio, Miraflores and Progreso; the hospital network has collapsed, and 85 per cent of the department was left without electricity, which has since been partially restored. Three aqueducts and the sewage system are affected, 10 roads are damaged, 2 bridges collapsed and 5 are being rehabilitated...Following an extraordinary meeting of the Cabinet at Nariño House, the Colombian government has assessed the catastrophe and the need to provide humanitarian assistance to the affected people and infrastructure investments to rebuild Mocoa and decided to declare an economic and social emergency. (IFRC, 7 Apr 2017)

As of early May 2017, the municipality of Mocoa continues clean up and recovery efforts following the devastating mudslide. The water supply has been restored to nearly 70% of the city. 384 people remain in temporarily shelters, and the government continues to provide food, toiletries, and other care; furthermore, the Government announced the allocation of 20,000 million Colombian pesos for an ambitious housing rehabiliation project. (Government of Colombia, 2 May 2017). 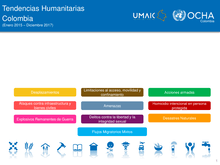 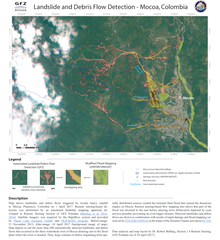 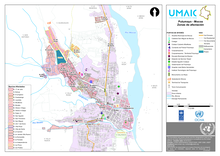