From the beginning of 2010 until mid March, heavy rains caused floods and mudslides in several areas of the Peruvian highlands (11 Departments), particularly Ayacucho, Apurimac, Cusco, Huancavelica and Puno departments
Over 190,000 people were affected, mainly in Cusco and Puno
In the Regions of Cusco and Puno, the floods caused loss of life, of homes, schools, public offices, roads, and bridges; as well as water and sanitation services
Approximately 66,166 hectares of agricultural lands were damaged or lost and 127,897 producers were affected, and the rains hit the area just before the harvesting period in February-April. (ECHO, 27 April, 2010) 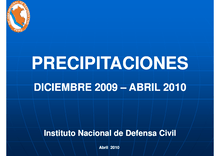