The landslide hitting Hunza District on 4th January 2010, was followed by boulders and rocks, sliding two villages including Atta Abad into the Hunza River. The incident occurred at Atta Abad, a picturesque valley in the country's Gilgit-Baltistan region, 720 km north of the capital, Islamabad, about thirty kilometers from Aliabad, the main town of Hunza valley. (Pakistan Red Crescent, 15 Jan 2010) According to various sources, at least 20 people were killed and several others injured when a massive landslide followed by boulders and rocks slid the Atabad village into the Hunza river on 04 January 2010. (Gov’t of Pakistan, 18 Jan 2010)

The Hunza landslide displaced more than 1,600 people. Forty-three houses were completely destroyed and a huge amount of rubble was swept into the Hunza River. About four kilometres of the Karakorum Highway were also blocked by the landslide. Relief and rescue operations were carried out by the National Disaster Management Authority (NDMA), the Gilgit-Baltistan Disaster Management Authority (GBDMA), FOCUS Pakistan and the Pakistan Red Crescent Society. Four camps were established on school grounds providing shelter for around 1,650 IDPs, who receive food, Non-Food Items (NFIs), health services and temporary shelter. (OCHA, 22 Jan 2010)

Around 25,000 people in upper Hunza were cut off from the rest of the country due to a 3 km blockage of Karakoram Highway due to the landslide. A 10 km wide lake also formed due to the blockage of the Hunza River, threatening the low lying areas. NDMA initially deployed four helicopters for response. Provision of shelter and food were provided to the affected population. As of 3 February, over 5086 people including 252 students were transported with the help of 560 helicopters and other means. (Gov’t of Pakistan, 31 Jan 2010) 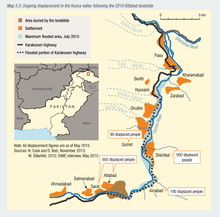 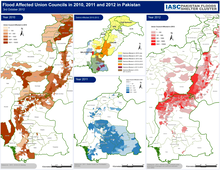 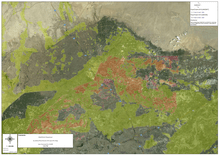