Heavy rainfall has been affecting the Eastern Region since 30 July, triggering landslides and causing rivers to overflow (in particular the Nabuyonga, and Namatala Rivers) and floods that have resulted in casualties and damage. At least 3,745 households have been affected in the districts of Mbale, Kapchorwa, Sironko and Bulambuli, and Bukedea, with 24 deaths recorded. Joint rapid assessments with Government authorities and partners on the ground are ongoing. The Uganda Red Cross Society is delivering immediate shelter, WASH and health assistance. Over the next 24 hours, more heavy rainfall with locally very heavy rainfall is forecast over the whole country. (ECHO, 1 Aug 2022)

Heavy rainfall in the Eastern region of Uganda has caused floods, flash floods, river overflow and landslides, resulting in casualties and damage. The overflow of Nabuyonga, Namatala, Nashibiso and Napwoli Rivers was reported, while the most affected area includes Mbale City. According to media reports, the number of fatalities has increased to 29 people (23 in Mbale City, three in Kapchorwa District and three in Sironko District, all in east Eastern Region). About 80 houses, nine education centers and 14 bridges have been damaged. 4,000 households (approx. 20,000 people) have been affected since 31 July. 5,600 people have been displaced. 400,000 people have been cut off the national water grid. Over the next 24 hours, more rainfall is forecast over parts of the Eastern Region, including over the already affected area. (ECHO, 5 Aug 2022)

The weather forecast by the Uganda National Meteorological Authority (UNMA) for the Elgon region for August 2022 has projected enhanced rains for the region with the possibility for the flooding challenges to continue. (IFRC, 15 Aug 2022) 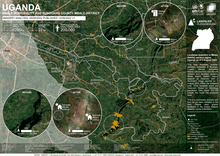