Effects from the rains have been observed as early as 7 April with the Kenya Red Cross Society (KRCS) responding with local resources to the minor emergencies since the onset. Since 16 April, the effects have worsened leading to displacements of population and livelihood disruptions, with the KRCS scaling up its response, especially in the provision of shelter services. The “Long Rains” currently being experienced have brought heavy rain and subsequent flooding to Counties of the counties of Tana River, Busia, Kisumu, Garissa, and Marsabit. Based on latest assessments from Kenya Red Cross staff and volunteers, the flooding has displaced a total of 4,493 households (26,958 people). At this time two deaths have been reported. Some of the displaced persons are hosted in makeshift camps and others hosted by friends and relatives. KRCS is coordinating with local administration to set up displacements' camps. In addition, 3,232 acres of land with crops have been destroyed in the Tana River basin. (IFRC, 23 Apr 2021)

On 13-14 May, heavy rain was reported across western and southern Kenya, including Nairobi, triggering floods that have resulted in four casualties. The Kenya Red Cross reports that more than 400 houses have been destroyed due to floods in informal settlements in Nairobi. About 6,800 families have been displaced after houses have been reportedly flooded. On 13 May, River Endau and River Kipsangui (in western Kenya) broke their banks, causing floodwaters which damage several settlements. In addition, several thousand households have been displaced and thousands acres of productive land has been destroyed in Tana River, Kisumu, Busia, Homabay, Migori and Baringo Counties. DG ECHO is supporting the provision of assistance to the affected households through the Kenya Red Cross. (ECHO, 17 May 2021) 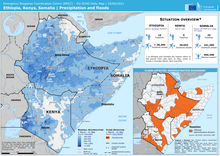