Significant heavy rains which began on 2 January 2021 have caused flooding in five states in Peninsular Malaysia – Johor, Pahang, Kelantan, Selangor and Perak on the morning of 4 January. National Disaster Management Administration (NADMA) had estimated that 6,241 families and 23,776 people are affected by the floods (as of 4 January 2021). A total of 303 evacuation centres had been opened. The Malaysian Meteorological Department (MetMalaysia) had issued a bad weather warning on 4 January 2021, cautioning about incessant heavy rain for several areas in Pahang and Johor. In its statement, rain has been forecasted for Pekan and Rompin in Pahang, as well as Mersing in Johor. Districts of Raub, Bentong, Temerloh, Maran, Kuantan and Bera in Pahang as well as Segamat and Kluang in Johor, are expected to experience similar weather until 4 January 2021. Heavy rain is also expected in some areas in Kelantan, Terengganu, Pahang (Cameron Highlands, Lipis and Jerantut) and Johor (Tangkak and Muar). The floods have affected 6 states in 22 districts and 23,776 people. (IFRC, 5 Jan 2021)

Heavy rainfall continues to affect most of Peninsular Malaysia (in particular Selangor, Perak, Kelantan, Johor, Pahang, Kedah, and Terengganu States) since 2 January, triggering floods that have resulted in casualties and damage. Media report, as of 7 January, at least 3 fatalities due to floods across the aforementioned States. (ECHO, 7 Jan 2021)

Heavy rainfall continues to cause widespread flooding in Peninsular Malaysia, leading to an increase in the number of fatalities and affected people. According to media, at least six people have died. Nearly 50,000 individuals have been evacuated, as reported by Malaysian Red Crescent Society. The worst affected state is Pahang, where about 27,000 residents have been evacuated in recent days. (ECHO, 11 Jan 2021)

Widespread floods triggered by heavy rainfall have affected most of Sabah State (Borneo's East Malaysia) on 11 January, resulting in casualties. According to the ASEAN Coordinating Centre for Humanitarian Assistance on disaster management (AHA Centre), more than 1 700 people have displaced and relocated in eight evacuation centres. (ECHO, 13 Jan 2021)

Flooding triggered by heavy rainfall continues to affect Malaysia, leading to an increased humanitarian impact. As of 15 January, the number of fatalities stands at six people, according to media reports. The latest flooding occurred on 12 January in Sarawak State, resulting in more than 3,000 persons displaced to 39 evacuation centres, as reported by the ASEAN Coordinating Centre for Humanitarian Assistance on disaster management (AHA Centre). (ECHO, 15 Jan 2021) 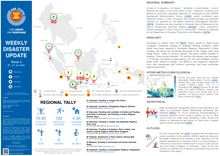 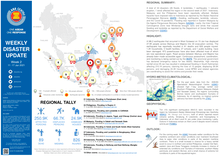 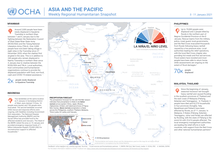