Floods have affected at least 14 IDP sites and townships in Rakhine State since 17 June. According to Camp Management Committees, rising waters have submerged shelter and latrines in Taung Paw IDP camp in Myebon Township, and Kyauk Ta Lone camp in Kyaukpyu Township. Both camps together host around 4,000 IDPs. Floods have also affected the Rat Chaung camp in Myebon Township hosting some 400 IDPs and Mya Ta Zaung camp in Mrauk U Township hosting 1,100 people. Elderly people, children and pregnant women in the Rat Chaung have reportedly been evacuated to a nearby monastery. Ahead of the monsoon season, OCHA and partners have prepared a contingency plan and stock list in support of the Rakhine State Government. - (OCHA, 23 Jun 2020)

A total of 4,000 households of 20,000 people in Mandalay are affected by the rapid onset flood that was caused by a broken geological sedimentary dike on 19 July 2020. The villages in rural area of Amarapura experience flooding from time to time due to its proximity to Ayeyarwady River that rises during heavy rains. However, in July 2020, the water level of Ayeyarwady River has risen to emergency level especially in Amarapura township. The flood situation worsened when a dike broke near Sagaing-Mandalay Highway on evening of 19 July 2020. The event caused a sudden rise of water level downstream in nearby township and villages. About 200 household were immediately evacuated in response to this. (IFRC, 27 Jul 2020)

According to the Department of Disaster Management (DDM), over 25,000 people have been displaced due to floods in Mandalay, Magway and Sagaing regions, and Kachin State. In Kachin state, nearly 7,750 people in nine townships were displaced between 11 and 27 July. 46 temporary shelters currently host around 6,650 people, while only few have been able to return to their homes. On 19 July, a dyke breach in Mandalay region affected some 16,000 people. Temporary shelters for the displaced population have been set up in Amarapura Township, in the southern part of Mandalay city. DDM is providing cash and food assistance, while humanitarian partners are providing hygiene parcels and masks. (OCHA, 29 Jul 2020)

On 30 July, more widespread floods due to the overflow of the Ayeyarwady River in Sagaing Region resulted in more casualties and prompted the evacuation of 6,500 more people from 1.5K households. As of 02 Aug, a total of 63,500 people have been affected by floods in Kachin, Sagaing, Magway, Mandalay, and Bago, Myanmar. (AHA Centre, 3 Aug 2020)

According to Department of Disaster Management (DDM), widespread floods is still affecting multiple regions in Myanmar. These floods are due to the overflow of the Ayeyarwady and the Thanlyin Rivers. At least 21,500 people are reportedly still affected. The DDM has been actively responding, providing relief items to those affected. According to the Myanmar Department of Meteorology and Hydrology (DMH), rain or thundershowers will be widespread in Kachin and Shan states and fairly widespread in Chin state. (AHA Centre, 30 Aug 2020) 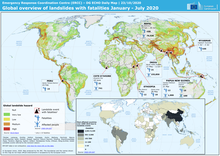 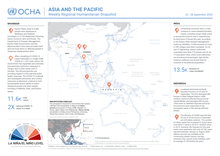 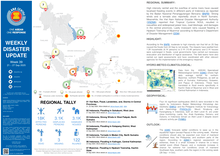