According to media reports, as of 2 December, at least three people died following a landslide in Walapane Village (Nuwara Eliya District, Central Province). At least 570 people have been displaced in Batticaloa District (Eastern Province) and more than 4,100 people have been affected in Eastern and Northern Provinces as a result of widespread floods. Furthermore, at least 5,000 people experienced power cuts, and several roads have been flooded and blocked. (ECHO, 2 Dec 2019)

As of 2 December, 14,164 people (4,153 families) have been affected (Situation Report, DMC at 1800 hours). There have been five deaths reported with a further five people injured and one person reported missing. Additionally, 259 houses have been partially damaged, but only 6 houses had been fully destroyed. Twenty-nine safety locations have been established in seven districts with 3,149 people (946 families) evacuated into them. (Gov't of Sri Lanka & WFP, 03 Dec 2019)

According to the latest report released by Disaster Management Centre (DMC) of Sri Lanka, 8 people died, 3 in Central Province after a landslide, 2 in Eastern Province, and 2 in Uva Province following flooding. At least 9 people have been injured and 4 are missing. Approximately 155,000 people have been affected and at least 1,360 houses were damaged. As of 10 December, there are 4,276 people displaced in 47 evacuation centres. The gates of several reservoirs have been preventively opened and low-lying areas of the Mahaweli River are flooded. (ECHO, 10 Dec 2019)

Approximately 12,000 people from 3,314 families have been affected by the heavy rainfall that is continuing in 13 districts across the island. The DMC said these people were moved to safe locations. According to reports, people living in Monaragala and Puttalam are the most affected districts owing to the prevailing adverse weather. (Gov't of Sri Lanka, 22 Dec 2019)

About 64,608 people (18,840 families) have been affected, with two persons reported dead, 62 houses fully damaged and 1,463 houses partially damaged. In addition, 17,766 people (5,255 families) have been evacuated to the 133 locations set up to assist displaced people. Intense rainfall from the north-eastern monsoon has led to an overflow of most of the water reservoirs and tanks in East, North, North-central and North-western provinces, triggering floods in several villages and affecting over 30,000 individuals. National Building Research Organisation (NBRO) of Sri Lanka had issued a "Level 3 Red Alert" landslide warning for the districts of Badulla, Kandy, Matale and Nuwara-Eliya. (IFRC, 23 Dec 2019)

The government has reported that over 71,000 people have been affected by the heavy rains, flooding and landslides throughout the island, while more than 360 have drowned in the storms. Approximately 6,700 have been evacuated to safety. (Govt. of Sri Lanka, 25 Dec 2019). 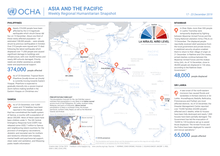 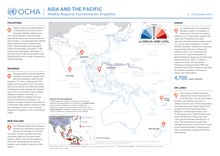