According to the Thai Department of Disaster Prevention and Mitigation (DDPM), approximately 158,028 households have been affected, and 19 deaths reported (of 6 September 2019); however, assessments are ongoing. The catastrophe causing damages to infrastructure and assets, including 3,818 houses, 439 schools and 57 health facilities damaged; 1,503,367 rai (equivalent to 240,538 hectares) of crops inundated, 1,065 prawn farms, 16,577 fish farms, and 814,816 livestock (cattle, goats, pigs and poultry) affected. There is only partial access possible in six affected provinces as roads are damaged and/or submerged.

There are concerns that the situation will be exacerbated by the impact of Tropical Storm Kajiki which entered Thailand on 3 September 2019; and has brought more rains in six provinces (Chiang Mai, Khon Kaen, Loei, Lumpang, Ubon Ratchathani and Uttaradit). (IFRC, 7 Sep 2019)

In Thailand, 19 deaths have been reported, 158,000 are affected and more than 4,300 buildings damaged and in Cambodia, 7 died and approximately 6,900 families were displaced. Over the next 24 hours moderate rainfall is forecast over most of the region, with locally heavy rainfall over northern Vietnam, and central-east Thailand. Locally very heavy rainfall is also expected over north-west Thailand. (ECHO, 12 Sep 2019)

As of 16 September, 24,000 people were displaced and 32 people were killed in floods in the four northeastern provinces of Roi Et, Si Sa Ket, Ubon Ratchathani and Yasothon, where the Department of Disaster Prevention and Mitigation is leading the response with support from the Red Cross. (OCHA, 16 Sep 2019)

Following Tropical Storm PODUL and Tropical Depression KAJIKI's passage, widespread floods have affected 32 Thai provinces since the end of August. Ubon Ratchathani, Yasothon, Roi Et, and Sisaket Provinces are the most affected and still in critical conditions. According to media reports, as of 19 September, 33 people are confirmed dead, 23,000 have been evacuated and 418,000 affected. At least 4,000 houses and 325,000 hectares of crops have been destroyed. The authorities have deployed rescue and emergency teams to help the affected population. For the next 24 hours, heavy rain is forecast over northern, north-eastern and upper central provinces. (ECHO, 19 Sep 2019)

The Department of Disaster Prevention and Mitigation (DDPM) of Thailand has reported that as of 22 September at 16:00 (UTC +7), flooding has affected 33 provinces across Thailand, and particularly in the northeastern part. DDPM informed that the flood receded in most of the province affected, however, there are 4 provinces (Ubon Ratchathani, Yasothorn, Roi-et, and Srisaket) where the flood is still severe and in critical condition, with number of evacuated people in Ubon Ratchathani and Sri Saket reach up to 18,000 spread out in 47 evacuation centres. Currently, the disaster is in level 3 or ‘Large Scale’ (the highest level of emergency is 4). According to the Thai Meteorological Department (TMD), the rather strong high-pressure system from China will cover upper Thailand regions leading to rainfalls decrease over those areas and temperatures dropping by 3-5 degrees Celsius from 23-26 September. (AHA Centre, 22 Sep 2019)

As of 25 September, the Department of Disaster Prevention and Mitigation (DDPM) reported that floods have receded in most of the provinces affected. However, there are 4 provinces (Ubon Ratchathani, Yasothorn, Srisaket, and Roi-et) where the floods are still severe and in critical condition, with at least 17,951 people spread out in 41 evacuation centres in Ubon Ratchathani, Sri Saket, and Yasothon. After the National EOC Coordination Meeting on 23 September, DDPM concluded that the response is within national capacity. Currently the situation is improving and entering the early recovery phase. No additional external resources will be needed at this time. (AHA Centre, 25 Sep 2019) 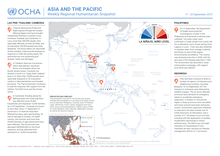 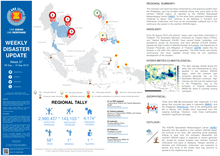 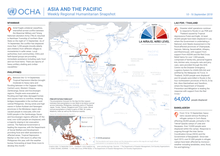