Freetown, the capital city of Sierra Leone has been experiencing persistent torrential rains from late May 2019 to August 2019. The highest recorded incident was the August 2nd rainfall causing associated impacts, including flooding in low lying areas as well as new episodes of landslides on low scale in the eastern part of the city. The main road to the city’s centre was rendered impassable due to the flood waters, heavily constraining vehicles and pedestrians having to find alternative routes. The city continues to experience more rainfall which may cause more flooding and spread to additional communities which would further increase the number of affected people. The floods and landslides were triggered by a heavy and continuous downpour that was experienced on 1st August 2019 from 10:00pm until the next morning on 2nd August 2019. The raging floods resulted in substantial destruction of houses, road networks and destroyed the livelihoods of approximately 896 households (5,381 people) according to the results of the rapid needs assessment (RNA) conducted by the Office of National Security (ONS) in collaboration with other humanitarian actors in disaster management. (IFRC, 13 Aug 2019). 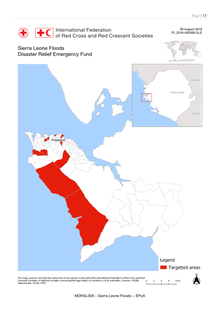 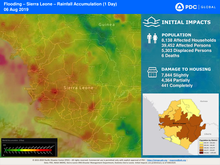