The landslides in Bududa District were triggered by a heavy and continuous downpour experienced from the night of 4th June, 2019 until the morning of 5th June, 2019. The landslides hit several sub-counties with most affected being Buwali and Bukalasi/Bundesi, Bumayoka and parts of Bubiita in the lower stream being affected by flash floods. As a direct consequence of these heavy rains, a total of four (4) major landslides occurred in Bududa: one in Bumayoka subcounty, one in Bukalasi/ Bundesi and two in Buwali. The landslides caused six (6) deaths, and injuries to 27 persons (13 males & 14 females) with all still admitted at Bududa Hospital. Amongst the injured, two (2) are children under 5 years (1 male and 1 female). First rapid assessments identified eighty (80) households as displaced (480 people), out of the 100 affected households and 669 people affected. In the neighbouring Sironko District, along the Mount Elgon slope, a devastating flood incident occurred in Buyobo Sub-County on 4th of June at around 4:00am. The continuous rains that started at 2:20am and continued consecutively for hours triggered flooding from uphill, which carried a huge mass of soil down the hills into river Bugibuni, prompting it to burst its banks and causing havoc to the communities downhill. The river carried massive water, logs of huge trees, soil debris down the slope and swept off houses and crops adjacent to it. The flash floods damaged houses of 111 households, with a population of 426 persons. Fortunately, no deaths were registered. Crops, merchandise, animals and properties worth millions of shillings were destroyed by the floodwaters. (IFRC, 24 Jun 2019)

Several landslides and floods across Bulambuli District (eastern Uganda) have resulted in 1 death and 19 missing. The most affected areas include Nabiwutulu, Gimadu Bugatiisa, and Buluganya Counties. The Uganda Red Cross Society is conducting an assessment to establish magnitude of the disaster and the needs of the people affected. Eastern Uganda was already affected by a series of landslides in early June this year, when at least 5 died. Moderate to locally heavy rain is forecast across most of Uganda on 2-3 September. (ECHO, 2 Sep 2019) 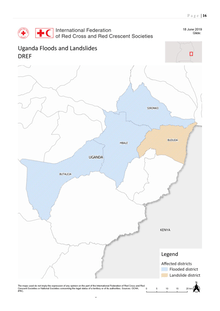