The Golestan floods, caused by heavy rains starting on 19 March, have affected a total of 10 cities in northeast Iran (The cities of Gorgan, Bandar Turkman, Azad Shahr, Aq Ghala, Gonbad-e Kavus, bandar-e Gaz, Ali Abad, Kalaleh, Kordkuy, and Minodaasht). The government is currently investigating local reports on the lack of mitigation measures by the Water Authorities. The worst affected areas are in the cities of Aq Qala and Gonbad Kavous and their surrounding villages where large parts are submerged under water. As a safety measure power supply was cut off in several areas. Of the estimated 60,000 displaced, most stay with relatives in nearby villages. At least 10,000 people are provided emergency shelter assistance in stadiums, exhibition areas, schools and other large public facilities provided by IRCS...Other areas in west and south-west of Iran have been affected by heavy rains too. Namely, the Provinces of Lorestan, Kurdistan, Kermanshah, Khuzestan, Fars and Kohkilouyeh. As of 25 March, floods in Shiraz, Poldokhtar, Khoramabad, Doreh, Khoramshahr, Abadan, Aligoudarz and Saghez were also reported. In Shiraz flash floods killed at least 20, injured 94 and an unverified number of people are still missing. In the city of Dezful in Khuzestan, south-west of Iran, the emergency situation is declared. (OCHA, 26 Mar 2019)

The death toll after heavy rains, floods and landslides that have been affecting northern, western and south-western parts of Iran continues to increase. As of 4 April at 8.00 UTC, 62 people are reported to have died and hundreds injured. Tens of thousands of displaced people are sheltering in the open and food and non-food items are urgently needed. Immediate assistance has been provided by UNICEF IRAN to the affected provinces Fars, Lorestan and Gorestan. 60 villages in Lorestan are under flood water, 78 intercity roads have been blocked, 2 199 rural roads and 84 bridges have been damaged. (ECHO, 4 Apr 2019)

Iranian authorities have reported 70 deaths as of Sunday resulting from flooding affecting several parts of the country. Mass evacuations have been ordered in the south-western province of Khuzestan affecting approximately 400 000 people. The Karkheh Dam, which is at near capacity, was opened to discharge excessive water build-up in an effort to prevent catastrophic failure. Local media is reporting that more than 12 000km of roads representing a third of the country’s network has been damaged. (ECHO, 7 Apr 2019)

As of 9 April at 8.00 UTC, 1 900 cities have been affected, with Lorestan, Khuzestan and Golestan the worst impacted provinces. 77 schools have been destroyed (55 in Lorestan and 22 in Golestan). There is a significant risk of additional flooding from Karkheh dam (Khuzestan Province). Six cities and 210 villages have been evacuated, 61 of which have been flooded. Heavy rain and thunderstorms are forecast in southern provinces, moderate rain in north-western provinces. (ECHO, 9 Apr 2019)

As of 6 September, the floods affected 10 million people leaving two million persons in need of humanitarian assistance. 78 persons lost their lives while 2,408 people are reported injured. More than 4,893 cities and villages have been hit by the floods, 179,000 houses were destroyed/damaged. Over 1,200 schools and 70 hospitals/health centers were damaged/destroyed. About 365,000 people were temporarily displaced, staying in emergency / temporary shelters, with relatives or host families. Agricultural areas were heavily hit, about one million hectares of farmland flooded. (IFRC, 6 Sep 2019)

Heavy rain affected the provinces of Sistan and Baluchestan, South Khorasan Fars and Hormozgan from 1-4 October, causing flash floods that resulted in casualties. According to the Iranian Red Crescent, as of 7 October, 5 people died in two separate flooding incidents in Hormozgan province. 137 have been displaced and 300 affected. At least 22 cities and villages have been flooded, mostly in Sistan and Baluchestan (ECHO, 7 Oct 2019.) 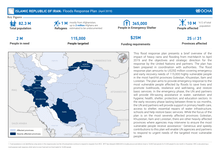 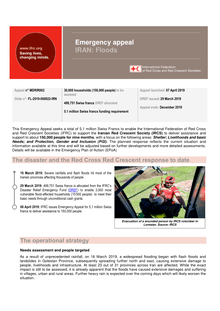 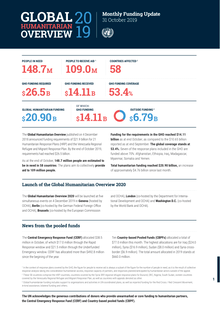 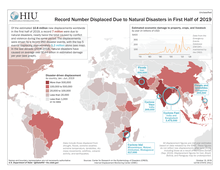 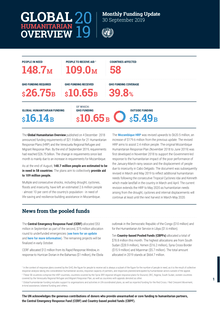