Heavy rain has been affecting several areas of the country, especially Sumatra Island, causing flash floods and triggering landslides. As of 15 October, 21 people have died, ten more are missing and 500 homes were damaged in the provinces of North and West Sumatra. Three bridges were brought down in West Pasaman district in North Sumatra. (ECHO, 15 Oct 2018)

On 21 October 2018, heavy rains triggered flash floods in Sigi District, Central Sulawesi Province. These floods occur in the midst of the emergency response to the earthquake, tsunami and liquefaction, and where 220,000 people remain displaced. (OCHA, 22 Oct 2018)

On 3 November, heavy rains with strong winds hit Bojonegoro District in East Java Province. BPBD reported that one person was injured and a number of houses were damaged by the winds and rain. On the same day, continuous heavy rains for three hours in Banjarnegara District, Central Java Province, triggered floods and fallen trees in Merden and Danareja villages. BPBD reported that flood water of up to 50 cm inundated farms and plantations as well as some residential areas. Electricity was cut off in some of the affected areas and there were no reports of any casualties. (OCHA, 5 Nov 2018)

As of 6 December, heavy rains and whirlwinds in Bogor City resulted in the death of one person and damaged 50 houses. BPBD, military, police and TAGANA (volunteers from the Ministry of Social Affairs) provided support to affected people. On the same day, an overflowing river in Kempo sub-district, West Nusa Tenggara Province inundated 120 houses and resulted in five people being injured. As of 8 December, heavy rains caused floods and landslides in Pacitan, East Java Province, and four people have been reported missing. A further four people have reportedly died due to flooding and landslides in Bali. Flooding in Semarang city also inundated 375 households in residential areas close to the river banks. (OCHA, 10 Dec 2018)

On 1 January 2019, torrential rain has caused a landslide that buried dozens of homes in a village in West Java. At least 15 people have been killed and dozens more are missing. More than 500 rescuers were sent to the area accordingly to disaster agency. (Deutsche Welle, 1 Jan 2019) As of 6 January 2019, the SAR team continued to make efforts to search for landslide victims in Sukabumi District in West Java. The joint SAR team found 64 people survived, 31 people died, 2 people were missing and 3 people were injured. (AHA Centre, 6 Jan 2019)

Heavy rain caused severe flash flooding in Makassar, southern Sulawesi and the surrounding area. The floods caused the loss of life of at least 6 people, while 10 are reported missing. (ECHO, 23 Jan 2019) As of 25 January at 8.00 UTC, 30 people are reportedly dead and 25 more missing in South Sulawesi Province. More than 3 000 people were evacuated across South Sulawesi Province, including in Makassar, and a major highway closed. Storm surges have also been affecting Bali, leading to the temporary closure of several beaches (ECHO, 25 Jan 2019) As of 27 January, floods and landslides in South Sulawesi Province affected 188 villages in 13 districts, with 68 people known to have died, seven people missing, and 47 people injured. More than 6,750 people have been displaced, as 550 houses were damaged and 5,200 houses flooded...More than 2,000 people were displaced to 13 IDP sites. 68 people killed (OCHA, 28 Jan 2019)

On 23 February, heavy rains triggered floods and landslides in three districts in Jayapura City with up to 1.5 meters of water reported in parts of the city. Up to 1,300 households were affected with no reported casualties. Landak District in West Kalimantan was also affected by floods on 21 February. The water has now receded in most of the affected areas. (OCHA, 25 Feb 2019)

A number of areas have been affected by heavy rains and floods over the past week, including in East Java, South Sumatra, West Java, Bangka Beilitug, North Sulawesi, and West Sumatra provinces. In Boolang Mongondow District in North Sulawesi Province, 9 people were killed and 19 injured in landslides on the 26 February. In South Solok District, West Sumatra Province, 21 people were injured and 101 houses were inundated in flash floods on 28 February. (OCHA, 4 Mar 2019)

Heavy rainfall caused flooding in parts of East and West Java provinces, as well as West Nusa Tenggara Province on 6-7 March. According to Government reports, at least nine people were killed, and more than 168,000 people affected. In Bandung District, West Java, 22,105 households in 10 sub-districts were affected. In East Java, around 4,490 households in 15 districts were affected. Flooding and landslides were reported in West Nusa Tenggara Province, with seven people killed and 684 people displaced. (OCHA, 11 Mar 2019) 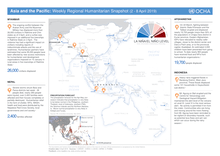 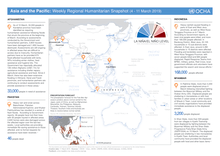 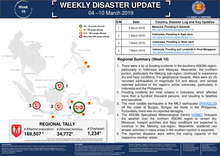