Due to heavy rains and storms starting on 24 October 2018, a total of 2,545 houses of Krasnodar Krai (region) of Russia were flooded, affecting tens of thousands of people. With over 200,000 inhabitants living in the disaster-hit areas, the governor of Krasnodar Krai declared a state of emergency on 25 October. The local authorities started the response and relief operation immediately and 600 people were evacuated from the flooded houses. (IFRC, 12 Nov 2018) 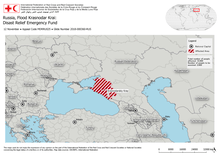