Since early August 2018, communities in Northern and Upper East regions of Ghana have been affected by heavy and continuous seasonal rainfalls, which was later exacerbated by the annual opening of the Bagre dam gates. Indeed, the Bagre Dam, located in Burkina Faso, caused unprecedented flooding in many local communities, destroying lives and properties. The Bagre Dam spilled on the 31st of August 2018, when the dam reached its maximum spillage level at 235m on that day. However, by the 10th of September, the dam was still spilling, and water level remained at the maximum level of 235m.

The continued rise in water levels resulted in flooding which has affected farmlands, posing threat to lives and properties as the spilled water found its way into the Black and White Volta Rivers, which overflowed into the three regions of the north and the Eastern Region. According to an assessment report by the National Disaster Management Organisation (NADMO), about 11,959.6 Hectares of farmland have been affected by the flooding, posing a food insecurity risk to the affected communities.

The country continues to receive more rains, which contributes to worsening the situation. Several families living close to the banks of the Black and White Volta Rivers, have relocated to other communities for shelter and safety. An initial assessment report produced by NADMO highlights the devastating impact of the floods. Some 23 communities in 2 districts (13 communities in Bakwu West District and 11 communities in Talensi Districts) with a total of 3,556 households (21,336) people have been affected in the Upper East region, whilst in the Northern region 202 communities in 9 districts thus 10,567 people have been affected, leading to a total of 31,903 people (5,317 households) affected in both regions. (IFRC, 26 Sep 2018) 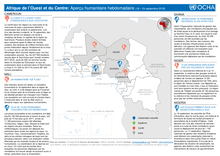 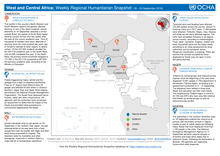