Since mid-July, torrential rains in western Nigeria have triggered floods, damages to infrastructure and fatalities in the Ogun and Katsina states of the country. (FEWS NET, 26 Jul 2018)

Heavy rain has resulted in flash flooding and casualties over the past week. 70 mm of rain was recorded over 24 hours in Enugu city (southeast Nigeria) on 1-2 September. According to media reports, as of 3 September, 21 people have died, 15 in Niger State, three in Kano State and three more in Nasarawa State. (ECHO, 3 Sep 2018)

On 17 September 2018, a National Disaster was declared in the worst four affected States: Anambra, Delta, Kogi and Niger. As of reporting period, there are 327,052 people affected in the flooded States. National and Territorial Emergency Operating Centers (EOCs) are activated to facilitate the response in the States and collect information on critical gaps and needs. (Gov't, 21 Sep 2018)

The authorities in the southern Anambra state on 18 September ordered the closure of all primary and secondary schools in Ogbaru locality as part of safety measures following heavy floods that have displaced more than 1,100 people in the state. The National Emergency Management Agency [(NEMA)] on 17 September declared national disaster in Anambra and three other states due to extensive floods. Following the declaration of disaster, UN agencies are supporting Government relief response. (OCHA, 24 Sep 2018)

Flooding since late August has affected some 826,000 people in 12 states, [NEMA] reported on 26 September. The deluge has displaced 176,000 people and claimed 199 lives. More than 150,000 hectares of farmland have been inundated and 321 roads and bridges destroyed. A state of national disaster has been declared in four states severely affected by flooding. Humanitarian organizations continue to scale up support to Government emergency response. (OCHA, 01 Oct 2018)

The Government of Nigeria announced that to date, some 200 people have died, a further 1,310 injured, and some two million people have been directly affected...The floods have also left more than 561,000 people internally displaced - and over 350,000 of them are critically in need of temporary shelter, food, safe drinking water, household items and health care. In the most affected areas, children have not been able to go to school for weeks. (OCHA, 11 Oct 2018) 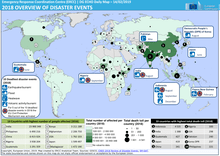 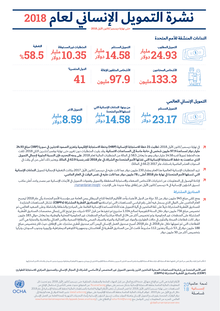 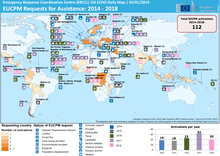