As a result of the registered rains between March 31 and April 2 of the current year, some 4,570 people (830 families) were affected by the overflow of the Magüí River in the municipality of the same name...; of this total, at least half corresponds to children and adolescents. The number could increase once the census is consolidated with the information obtained from rural areas. (OCHA, 6 Apr 2018)

On 5 May, a collapse inside the third tunnel of the Hidroituango Dam project (Antioquia Department) increased the levels of the Cauca river in the area. On 12 May, a natural unblocking in the second tunnel produced a flash flood affecting Puerto Valdivia and Taraza municipalities. Following these events, 544 people were evacuated (250 in official shelters) and 60 houses destroyed...Further events in the dam, which is in risk of collapse, have led to the evacuation of more than 9 000 people. According to the authorities, there are around 180 000 people at high risk. (ECHO, 18 May 2018)

On 14 May, the Antioquia State Government declared Public Calamity. The Antioquia Governor estimates that in the worst scenario of the dam's rupture, 113,000 people would be affected. There is a current state of maximum alert at locations downstream of the project on the Cauca riverbanks: Ituango, Briceño, Valdivia (Corregimiento Puerto Valdivia), Cáceres, Tarazá, Caucasia and Nechí. A preventive evacuation order was issued to the departments of Sucre (Majagual, Guaranda, San Marcos, Sucre, Caimito y San Benito de Abad), Córdoba (Ayapel) and Bolívar (Achí, Magangué y San Jacinto del Cauca). (IFRC, 19 May 2018) 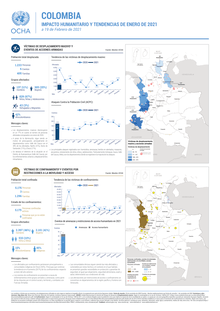 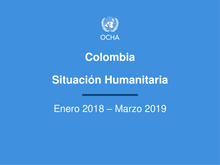 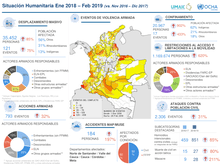