In South Siberia (Tyva Republic and Altai Krai Region) and in the southern part of European Russia (Volgograd Region), as a result of rapid snow thaw and runoff of meltwater into riverbeds, water levels rose significantly from late March 2018 onwards. As of 16 April, there were 11,550 affected people in these regions in need of help from the Russian Red Cross Society (RRCS). (IFRC, 27 April 2018) 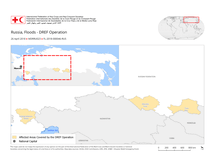