On 19 March, floods were reported by the Belarusian authorities, local media and Belarus Red Cross (BRC) branches, with 316 houses reported to be flooded in three regions of the country. According to information provided by hydro-meteorological agencies, rapidly-increasing volumes of water are observed across the entire country. The rise of water levels amounts to 10–200 cm per day, depending on the district.

The Ministry of Emergencies predicts that 140 villages and towns and 36 gardeners’ partnerships will be affected by floods in a total of 43 districts. In addition, 70 road segments and 15 bridges, and at least 6,600 garden cottages are estimated to be flooded in the next two weeks. The water level of rivers is rising, with ice still covering the rivers Western Dvina, Dniepr, Berezina, Sozh, as well as the Vileiskoe, Chigirinskoe, Zaslavskoe, Soligorskoe, Krasnaya Sloboda water storages, and the lakes Drivyaty, Naroch, Chervonoe. (IFRC, 29 Mar 2018) 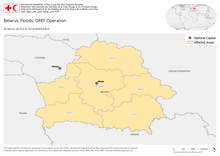