Flooding in various localities in the north-east region has cut off roads and made helicopter landings impossible. Aid convoys by road to Rann, a remote location in Borno sate which hosts some 43,000 displaced people, has become extremely difficult. Some 800 metric tons of food, nutrition, health, WASH and shelter supplies are awaiting delivery. The logistics sector and WFP are exploring the possibilities of bringing in relief from Cameroon (OCHA, 11 Aug 2017)

The rainy season has greatly reduced access to places that are in severe need of immediate sector interventions. LGAs like Gwoza, Ngala, kaga balge, Dikwa, Damboa, and Bama among other locations have IDPS and returnees living in deteriorated shelter conditions, while emergency shelter interventions have been delayed due to lack of response capacities, security, access, land availability and logistics needed to set up appropriate sites (IOM, UNHCR, CCCM Cluster, Shelter Cluster, 21 Aug 2017)

As the rainy season approaches in Nigeria, floods are expected to affect many sites situated in flood-vulnerable locations in Borno state. The flood vulnerability mapping indicates that about 59 camps could be exposed to flooding hazards, as they are located along or close to water flow accumulation areas. Paired with the continuous influx of IDPs to existing sites and to Local Government Areas, overstretching capacities on the ground, and the level of congestion in IDP sites, this will increase health and sanitation concerns. In addition to the risk associated with access and sanitation, the preparation to the rainy season requires urgent interventions in terms of NFI and retrofitting of unsafe shelter units, through the provision of emergency shelter materials to reinforce the structures against strong winds and rains (IOM, UNHCR, CCCM Cluster, Shelter Cluster, 5 Sep 2017)

On 4 September, heavy rains have led to flash floods, discharges and river overflowing in Benue State, centre-east Nigeria. Almost 250,000 people are reportedly affected in 21 Local Government Areas. Hundreds of houses have been destroyed and crop fields damaged. The State Government and the National Emergency Management Agency (NEMA) are setting up two camps in Makurdi, for people who have lost their homes. The Nigerian Red Cross is providing immediate response in terms of food and non-food items. NEMA has requested technical assistance from the international community. UNICEF has carried out a quick assessment and is increasing access to drinking water in the two camps. These floods are considered the most severe since 2012. (OCHA, 6 Sep 2017)

Weeks of torrential rainfall led to flash floods, discharges and river overflowing in Benue State, north-central Nigeria, affecting more than 100,000 people across 21 local government areas in the state. The Nigerian Red Cross provided immediate response of food and non-food items. A displacement site which was set up by the State Government and the National Emergency Management Agency (NEMA) was closed on 9 October and flood victims provided with transport fare to return home. (OCHA, 18 Oct 2017) 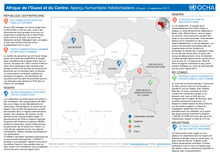 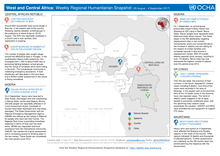