Over the past week, heavy rains in southern China caused severe floods and landslides affecting over 7.3 million people. A massive landslide in Xinmo village (Sichuan province), left at least 10 people dead and nearly 100 people still missing. The Government has deployed rescue teams to the affected areas. Red Cross Emergency Response Teams are also providing relief goods and support to the search and rescue operations. Heavy rainfall is forecasted in the coming days which could trigger additional landslides. (OCHA, 27 Jun 2017)

Heavy rains in the past few days have led to widespread flooding in southern China, killing over 15 and forcing the evacuation of tens and thousands of people. On July 3, 2017, China issued a grade-IV emergency response for rain and floods that have left 16 dead and 10 missing in Guangxi Zhuang Autonomous Region. Over 92,000 residents have been relocated, according to the regional civil affairs department. The disaster has caused around 2.9 billion yuan in direct economic losses. (Xinhua, 03 July 2017)

Meanwhile, thousands are battling floods in various provinces along the Yangtze River. In Hunan province, the Xiangjian River reached a record 39.51 meters on July 3, beating the previous record of 39.18 set by a flood in 1998. Floods have inundated houses, uprooted trees, damaged cars and sabotaged roads in Changsha, capital of Hunan. Around 16,000 people are on high alert for flooding in neighboring Hubei while 28,100 people are battling against floods in eastern Jiangxi Province. The Chinese government has set aside a total of 1.88 billion yuan (276.8 million US dollars) to aid disaster relief in 20 provinces and regions. (Xinhua, 03 July 2017)

Natural disasters killed 204 people in China in the first six months of 2017, according to the Ministry of Civil Affairs and the National Commission for Disaster Reduction. Floods and geological hazards accounted for 134 of these deaths. (Xinhua, 12 Jul 2017)

Since 29 July, flash floods in Shaanxi Province have caused 10 deaths and prompted the evacuation of an estimated 76,800 people. The Ministry of Finance and the Ministry of Civil Affairs have allocated 100 million yuan (about 15 million US dollars) for flood relief operations. Parts of Qinghai, Gansu and Yunnan provinces were also affected by localized flash floods, where authorities issued landslide warnings. The flood relief efforts are led by local authorities; no request for international assistance is expected. (OCHA, 07 Aug 2017)

On 27 August, Tropical Storm Pakhar made landfall in China, bringing high winds and rain to Hong Kong and Macau just days after one of the strongest typhoons on record, Hato, caused serious flooding and damage in the same areas. (OCHA, 28 Aug 2017)

As of 9 October, 23 people have died due to heavy rain that started on 1 October. Storms have forced the evacuation of nearly 34,000 people in Chongqing Municipality and the provinces of Anhui, Henan, Hubei, Sichuan and Shaanxi. More than 5,200 houses collapsed and over 24,000 were damaged. Direct economic losses are estimated at 3.26 billion yuan (490.3 million US dollars). (Xinhua, 9 Oct 2017)

As of 12 October, 5 people have been killed and approximately 26,700 people evacuated due to torrential rain in Hubei Province. More than 8,500 homes were destroyed. Direct economic losses are estimated at approximately 4 billion yuan (about 608 million US dollars). (Xinhua, 12 Oct 2017)

On 16 October, Typhoon Khanun made landfall in Xuwen county, Guangdong Province, in southern China early on 16 October. The Guangdong Flood Control and Drought Relief hq reported that more than 368,000 people within heavily affected areas of the province, and at least 38,200 tourists, had been relocated in advance of the typhoon. Guangdong, and neighbouring provinces Fujian and Hainan, experienced disruption to construction, schooling, maritime and transportation operations. The same day, Typhoon Khanun was downgraded to a tropical storm and emergency response levels were lowered in Guangdong on the same day. (Xinhua, 16 Oct 2017)

On November 8, heavy downpours forced the evacuation of over 11,000 people in southern China's Hainanan province. Meanwhile in the city of Wanning, over 78 villages were flooded, a highway section was inundated, and all schools were suspended. Fire fighters, border patrol, and armed police have been deployed for rescue operations. (Xinhua, 08 Nov 2017) 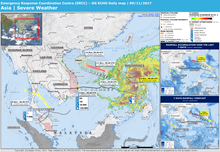 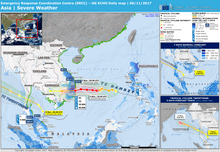 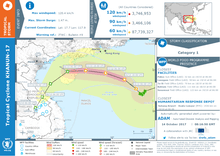