Severe weather, including thunderstorms, heavy rain and strong winds, continues to affect the Indian states of Arunachal Pradesh, Assam, Manipur, Mizoram and Nagaland, causing floods. According to local media, as of 16 June at 7.00 UTC, at least 14 people died in Assam and Mizoram States. Assam National authorities mentioned that over 18 000 people were affected in four districts. (ECHO, 16 Jun 2017)

Flooding worsened in Assam on 2 July, when new areas were submerged by the rising waters of the Brahmaputra River and its tributaries. As of 5 July, official figures show over 390,000 people have been affected in over 850 villages across 15 out of 32 districts. At least one person has died. Just under 45,000 people are reported to be sheltering in 160 temporary relief centres. 31,000 more than on 2 July. More than 16,000 hectares of agricultural land have been flooded Heavy rainfall has occurred across much of India since June, as is typical during the June–September monsoon. Rainfall across the state, however, is still at normal regional levels for the season. Heavier rain is expected in the coming days and weeks. (ACAPS, 6 Jul 2017)

Since early July, heavy rains and floods were reported across India (Assam, Manipur, Arunachal Pradesh, Gujarat, Bihar, Uttarkand, Uttar Pradesh and Orissa states). In Assam State alone, state disaster management authorities reported that over 1.7 million people have been affected as of 12 July. Media sources reported that at least 150 people have died nationwide due to the floods. About 1,300 National Disaster Response Force personnel have been deployed for the relief operations along with the Indian Armed Forces. The response continues to be led by national authorities. International assistance has not been requested. (OCHA, 17 Jul 2017)

Since 19 July, two major floods affected 29 districts in Assam causing severe damage to houses and agricultural land. Over 165,000 people have been affected, with 76 deaths reported. In Gujarat, 94 people have reportedly been killed. As of 28 July, Gujarat State authorities are providing assistance to 18,000 people inside relief camps, while 58 relief camps in Assam are serving 11,600 people. The Indian Armed Forces and civil society organizations are supporting the Government-led response. No international assistance has been requested. (OCHA, 31 Jul 2017)

Since 15 July, the state of Odisha has witnessed heavy rainfall, triggering flash floods in the rivers Nagabali and Kalyani of Rayagada district. More than 28,000 people in 50 villages under Rayagada Block and 20 villages under Kalyansinghpur Block have been affected. (ACT Alliance, 8 Aug 2017)

Flooding in Assam and neighbouring north-eastern states has affected over one million people. As of 20 August, at least 303 people in Assam, Bihar and West Bengal have died. In Assam, 304 relief camps have been set up where 138,648 people have taken shelter. In Bihar, 1,289 relief camps are operational in 17 districts. With access restricted, rescue operations are ongoing using helicopters. The Prime Minister announced INR 20 billion for relief, rehabilitation, reconstruction and flood mitigation. (OCHA, 21 Aug 2017)

As of 24 August, 32.1 million people have been affected by flooding across Assam, Bihar, Uttar Pradesh, and West Bengal. More than 600 people are known to have died. Those affected by the floods have been evacuated to safer places by the army, police and navy with boats and helicopters. Almost 2,000 relief camps have been established where authorities are providing food and shelter. (OCHA, 28 Aug 2017)

In Manipur, many low-lying areas in and around Imphal, the capital of Manipur, were inundated by flood waters. The road network was cut off at many places due to landslides. Flood waters still remain at many low-lying areas, increasing vulnerability for water borne diseases. Four districts – Imphal West, Imphal East, Thoubal and Bishnupur were the most affected districts. As per the estimates reported by Manipur State Department of Relief and Disaster Management, approximately 3,000 families, 27,000 livestock were affected. (IFRC, 9 Oct 2017)

As of 17 October, Bangalore has recorded around 1615mm of rainfall this year, crossing the previous record of 1606mm in 2005. The rain has claimed the lives more than 10 residents. Besides Bangalore, rains continue to lash several other districts in Karnataka. Mysore, Gulbarga, Gadag and Kolar also witnessed heavy rainfall in the last two days. The government has announced that the southwest monsoon is intensifying with no signs of relief in the days to come. (Govt. India, 17 Oct 2017) 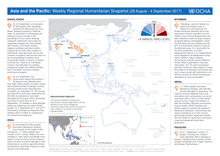 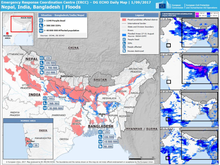 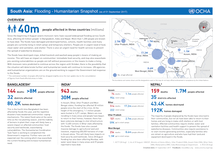