Seasonal heavy continuous rains in Malaysia from 26 December 2016 caused flooding in two states: Kelantan and Terengganu. The floods temporarily displaced about 25,000 people and have rendered some villages inaccessible due to damaged bridges and blocked roads. (IFRC, 5 Jan 2017)

Rains after 23 January 2017 caused flooding in six states: Johor, Kelantan, Pahang, Perak, Selangor and Sabah. The worst-hit states wereJohor and Pahang, where waters rose 1.5 metres in certain areas. The total number of affected people was 14,903 as of 27 January. (IFRC, 27 Jan 2017)

The situation improved significantly after the Lunar New Year weekend (28-29 January), with floodwater receding in several affected districts, allowing families that were in relief centres to return home. According to media reports, at least 80 per cent of evacuees in the affected areas have returned home. As of 8 February, 189 people (54 families) were still in active relief centres in Perak.

While the situation has improved, forecasts by the Malaysian Meteorological Department projected that more rains may affect Peninsular Malaysia in the second week of February. Such as scenario would affect the condition of major rivers in Pahang, Terengganu, Johor and Perak, which are still at critical levels. The public authorities, in particular NADMA, and response organizations, including the Malaysian Red Crescent Society (MRCS), have taken precautionary efforts to ensure that response teams are ready for the potential second cycle of flooding in these areas. (IFRC, 9 Feb 2017)

During the week of 20 - 26 February, torrential rains caused the Baram and Limbang rivers in Sarawak to overflow. This triggered flooding that forced the evacuation of 830 people. (ASEAN, 26 Feb 2017)

Torrential rain has caused flooding in Pahang. Responding to the situation, the local authority evacuated 233 people to the evacuation centres. (ASEAN, 5 Mar 2017)

Floods have affected people in Hulu Perak and Kerian Districs, Perak State. 232 people were evacuated due to the incident. (ASEAN, 2 Apr 2017) 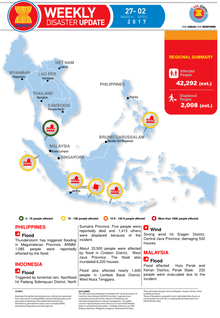 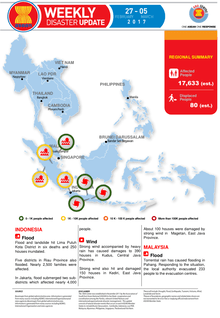 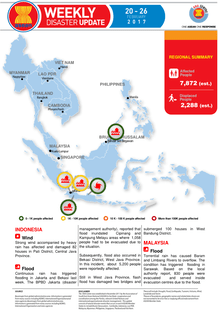