Since November, rains and winds have hit the town of Gemena, headquarters of the province of Sud-Ubangi...On 9 November 2016, rain and violent winds intensified, causing extensive floods in the Gemena neighbourhoods located on the banks of rivers Mombonga, Sukia and Labo. (IFRC, 25 Nov 2016)

The impact of the rains and violent winds caused flash flooding, leaving seven people wounded. These people received first aid and were evacuated to the nearest health centres. A rapid evaluation by the National Society noted that 105 houses were destroyed: 53 of these completely and 52 partially, while the balance of affected families, 173 families, lost their household possessions. Four wells (out of seven) in Gemena town were contaminated with dirty rainwater and 200 household latrines, half of those available, were flooded or entirely swept away. (IFRC, 20 Feb 2017)

Heavy flooding sparked by torrential rains and surging river waters on 26 - 27 December killed at least 50 people and left thousands more homeless in the country’s south-western region. The heavy rains caused the Kalamu river, which flows through the city of Boma into the River Congo, to overflow for two hours before the waters receded. The waters left parts of the city covered in up to a metre of mud. (OCHA, 3 Jan 2017)

One month after severe flooding in the southwestern town of Boma killed at least 50 people and caused extensive material damage, nearly 3,000 households - out of 3,400 affected - have received assistance from humanitarian organizations and provincial authorities, as well as private companies and Congolese citizens. Food, pharmaceuticals, and other necessary items were distributed during the past two weeks. Relief teams continue to advocate for psychosocial support for those who faced trauma. (OCHA, 31 Jan 2017) 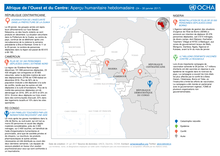 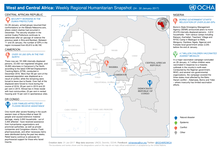 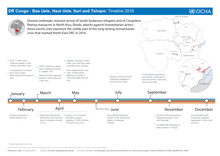